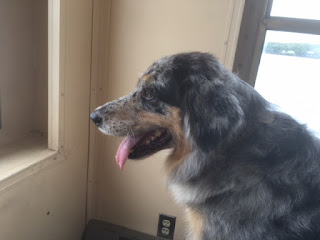 It is National Nude Recreation week.  Yeah!  It IS Christmas in July.  I have written that this is a great week to bird well within the AANR spirit of the week.  I will, though, neither confirm nor deny that I have, currently am, will have, or plan to bird au naturel this week.  Can you bear to go bare?  I know I'm such a dog in puns and in not answering or admitting anything despite my vow of openness but well..I have what is left of my reputation to hold on to....hold on a moment.

You know, I really must be a dog.  I was on the ferry to Vinalhaven, Maine yesterday after my odd flight through San Antonio to get here and this dog (in a pet-free cabin mid you) sat next to me and nuzzled me.  i wasn't sure if he even had an owner for an hour.  It seems I  am always visited by strange dogs who want to befriend me.  Even service dogs try to crawl into my lap on occasion. A blog I had on Lucy.  Maybe it is that I offended everyone in my last post except pets and they felt sorry for my dying cat and this dog was a representative of all of them and he sat next to me to comfort me in some way.  This dog was from northern California, by phone number on collar.  Its owner found him and eventually praised me for calming the frightened dog down. He had never traveled on a boat so well.   It was me comforting him!  Maybe I should market myself as a dog psychologist?

It was an odd drive to and from Rockland and the Ferry terminal, anyhow.  The radio was filled up of with Clinton and Trump apologists...oh I mean supporters...oh I mean unbiased reporters...yea, correct on that observation.  This one woman, masquerading as an indie reporter...had just written a book on Clinton's Secretary of State years, rising from the ashes so to speak.....yea right....how do you spell PUFF piece!

I had had enough, then I went for coffee and read a text...trying to be safe.

My friend Craig Casper, an old frat brother of mine from college sends me this link:

He was thinking doing a big year with extinct attack birds, terror birds would be cool to watch--put a little more danger in it all, I was thinking sort of like the Running Man movie which I say, I don't like. Jesse Ventura in a bird suit.(maybe his best movie).  They are all extimct like the dreaded sloth bear, but say something that you really could do..speaking of bears,.. maybe a big year seeing the world's species and subspecies of bears, and using my nude year rules, you CANNOT be in an enclosed space.  A little danger...the Polar bear?

I have trouble with bears, that might be the end of ME!  It would BE sporting, however...entertaining.

Bares, Bears, I've written a pun loaded blog on this before and a whole chapter of being chased by bears...that is an old story.

So speaking of both politics, Maine, and bears, I ended up in Bowdoin College....what could these three have to do with that?
It is so "Black and White"
If you figure out this pun, you really are a sick one on trivia

Okay, the first puff biography put out in an election year ever was written by Nathaniel Hawthorne about his college drinking chum.....Franklin Pierce.  Came out 6 weeks before his election.

Franklin Pierce, arguably the worst president in US History, and he had a son, he had a son, another son, a daughter, I was going to say who gave birth to a man named George Herbert Walker Bush, who lost to Bill Clinton,  Bush who had a son,  good Ole' GW...where is GW these days anyhow?  BUT this genealogy as put forth in a comical but very good college course taught by my hero Robert Wuhl is not correct, I repeat not correct. The Presidential family of the Bush's is not directly in line to the Pierce family, Barbara Bush is only the fourth cousin, four times removed from the infamous president Franklin Pierce.  GW cannot blame his genes well...not on the Pierce genes

Bowdoin College is a nice looking place though.... 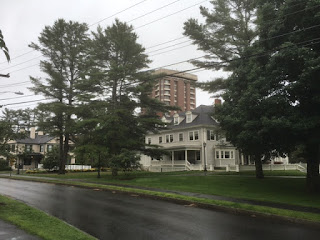 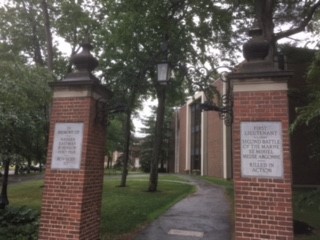 Lots of pine trees and it is a good school.  But why was I at Bowdoin College anyhow....?

Let me say it right here, my wife or daughter don't usually read this blog unless I tell them to.  I stated honestly that I made a vow to only go on ONE birding trip in 2017.  I was honest... although my friend Thor thinks I lied, lied like a rug, (he did not say that but I know Thor, he thought it).  Okay, the truth.  Honesty will set me free.  You see,   2017 is a college road trip year for my daughter.  I have plans.  Now shush!   My secret...I'm thinking she should tour....University of Arizona (if say a rare bird is around..coincidence?), San Diego University, maybe Texas A&M-Kingsville, Rice University in Houston (after a big spring thunderstorm?), and I don't know...Stetson University in Florida, I'm thinking of looking at schools for her in Canada (maybe St. John's Newfy in late April?)....maybe we'll even tour Bowdoin College....those black-tailed godwits can turn up anywhere, even in Maine.  Sneaky or brilliant....I'll let you decide, but be on the QT!!!!  Please!  The plan is fool proof.  Sly dog, Olaf.

BTW, Pierce had issues as a president but on his way to Washington, his young son and heir, fell off the train and was run over by it and killed, think decapitated.  He was the last of his children, all the others had died previously, some more gruesome. His wife, in mourning or severe depression and TB, was never seen out of the White House for two years all the while writing both letters to her dead son, and telling people God took her son as saying He was against her husband becoming president, and Pierce began to drink heavily for 4 years, mostly because his wife was against it, a fierce prohibitionist and so pious they had to have a pastor come and bless the bed before she would share it with her husband.....his term was dark, he was morose, and well, him and the Mrs. grew apart. Tough to get a pastor over for spontaneous blessings. But that is history.........

Thankfully it wasn't quite so dark in Vinalhaven, but it did rain both coming and going.  John Drury, took me and four birders out to Seal Island again to try to see the loneliest bird in Maine, maybe anywhere, the old man of Seal Island, Tropi the tropicbird, a no show on my previous trip.  I was lucky in that I got the last room on the island after my confirming email went to spam...lucky dog me...

It was a very birdy trip.

We had a raft of Great shearwaters, that was cool. 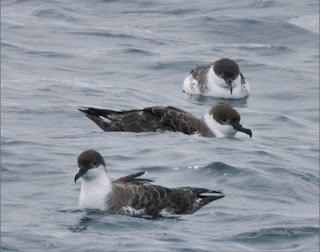 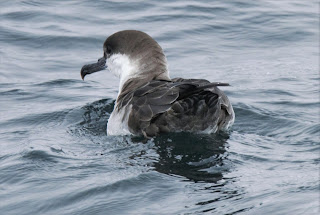 more than I've ever seen.  Of course the ever present Atlantic puffin 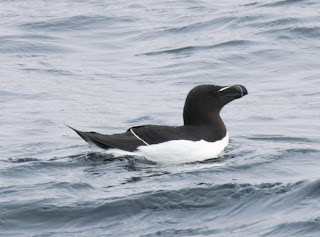 and Wilson's and Leech's storm petrels, A Manx, Great cormorants, and gannets.  I got my Harley for the lower 48, first ever. 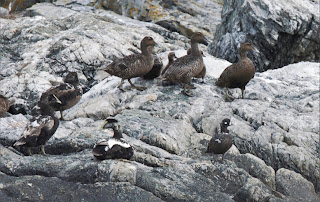 It was a good trip, but Tropi didn't show again, so we waited...and waited, I was beginning to figure out how many days I would dare spend here as I vowed to not leave Maine until I got Tropi...then I saw something white flying low over the water.  Tropi!!!!!!!!!!!!!!!!!!!! 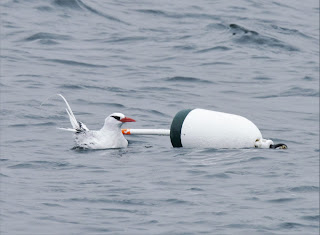 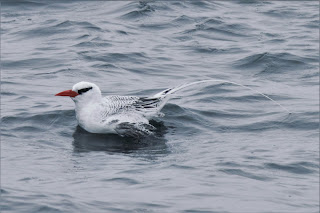 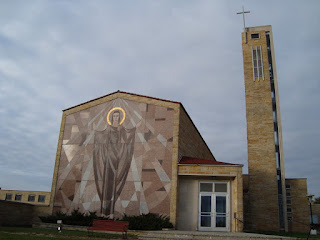 Here he is making love to a buoy.  I just missed the act on camera before he fell off of "her." Apparently the red billed and the red-tailed will cross-breed? 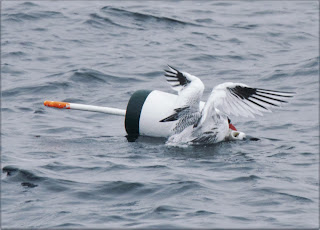 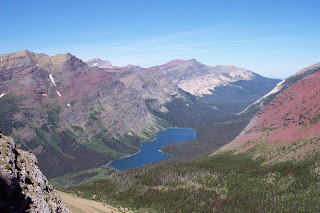 Cover picture for scrollers of first view of Elizabeth Lake coming out of Ptarmigan Tunnel, Glacier Park, nothing put purity and goodness here....


SAFE TO LOOK NOW...
The guys on the boat asked if I was happy....it was more like a big cathartic after being constipated for a week....graphic but I think the correct feeling....relief, yes, happy, IDK.  Tropi is a really cool bird though and after many US pelagics and two trips here finally...finally, I nabbed the species, oddly it is a species I see every day on the best place anywhere for naked recreation....Orient Beach, St Martin FWI.

number to go to old record:  2

Remembering my past, and the best seat give up ever in Iceland...it could be a book in itself, Alice Cooper, nudity, free massages, ticket to Norway, a $1000 dinner....and more...all free.  I tried to sell my ticket for $500 on very oversold flight in Portland, then the original flight was delayed due to broken tray table for 40 minutes as such lost my original connection, as my seat wasn't taken, the alternative thru LaGuardia would have gotten me home sooner too.....I could be forever in Detroit, the lost stray mutt named Olaf....I could be here for a long time...This was no crazy wonderful night in Reykjavik with Cooper's roadies........note to self...NEVER ever again volunteer to give up a seat.

I'm such a mutt, I'm going to stink like a dog when home.  Call me Dog breath Olaf....enjoy the week hopefully as I will.....