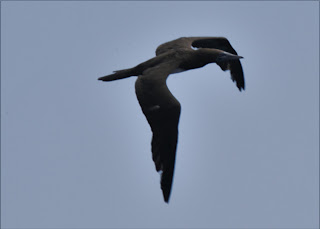 I went down on Saturday for an Orange County pelagic.  I can never get on Alvaro's website so I didn't know they had one but to be honest even though they saw a Buller's and some whale trip up north saw a Nazca Booby, I was happy to remain south, I was concentrating on the 3 missing southern species, I'd go up north soon enough and the Buller's, it was and is, way too early for them anyhow....so they saw one....well, that I cannot change....

Initially I concluded that this was yet another strike out, a big lemon, but this was a really fun trip, and this year is about the people and NOT the birds IMHO.  Big deal, I can see all these birds, maybe I will see the most, probably not.  In the end, who knows who saw what.  I know what I saw and I know which birds I saw were iffy, and I've tried to find back up birds.  I had a comment on my blog last week about my really bad photograph of a "sprague's" pipit.  They were rightly concerned that it was a imm. horned lark.  Tough ID, I agree, expecially with such a bad photo.  It could be, but I sure remembered white flanges on the tail which I know is not characteristic and as I causally looked at it but the beak/bill left me with my only thought was that it was a pipit, not a lark.  In fact, that was what I studied before I decided I better dig the camera out of the passenger seat.  I have changed my ebird on that to unidentified.  The one I saw ten miles from there I am certain was a Sprague's.  I saw that one well very thin flesh bill but I never got it in focus on a one fly-by shot I took. You can barely tell it is a bird, but I can't prove that bird to everyone else.  I can't prove the initial one in Minnesota however, being May, not much chance for a imm. Lark then.   So you know, who the heck knows what I or John, or Christian, or Sandy, or Neil saw?   This is an imperfect world.  I'm trying hard and I appreciate your input.  If you are not certain, I am not.  There have been a few rare gulls seen this year that will never pass the scrutiny of state checklist committees and some of them have shown up on lists.  I'm certain I have listed no hybrids, and I was careful to make sure my sharp-tailed grouse and GPCX were 100%.

What I did see on this boat trip were two important birding people.  Dorian Anderson is a legend in my mind.  Where I have made this huge, large, painful carbon footprint, he didn't.  Like the Forest Gump character (although Dorian is most unlike him) Dorian went on the road to leave his troubles behind imho.  He may or may not agree with that statement but I really admire his footpowered journey.  I ran into him on the boat, he was also on this boat in January and we had some nice chats.  Dorian was sporting a new camera, recently made his girlfriend his wife or maybe it was the other way around and he is doing well.  If no where else Dorian, I salute you for 2013!!!  GREAT YEAR!!

I also had a nice chat with John Dunn.  The other legend.  Birder extraordinaire...etc etc.  He was calling birds for the local Sea and Sage Audubon for the trip and he was congenial enough to chit chat with a pee-on like me.  I appreciated it.  John spent many years on the much maligned ABA Checklist committee and was right in the middle of the 2011 Hooded crane fiasco.  I don't have any skin in that deal but I have heard the story many MANY times.  Dunn voted no, and I can guarantee he has received many very negative emails.  To be honest, I see his point.  I also see the state points, and what always troubles me is the inconsitency, like the wood-rail and the sungrebe accepted, but this bird rejected.  IMHO the providence of all three birds is uncertain at best and suspect at worst.  As such knowing nothing more than just enough to be scary, I would have voted no on all three, it is such that any and I mean ANY doubt should be a no vote.  Alas, I would never be on such a committee, what a thankless task, joyless, task...what really is the reward for it.  Let me say it here, thanks John for serving, thank you very much.  Maybe if the Pine flycatcher gets rejected, I would be like the crane people but IDK, there is too much anger misdirected in this world.  Hate those that are killing birds and wildlife and direct the anger there....Monsanto et al. might be a better place to start.

Well what did we see on this voyage?
We saw 6 Brown boobies on the oil derick like they had never left.  Two were flying around as above 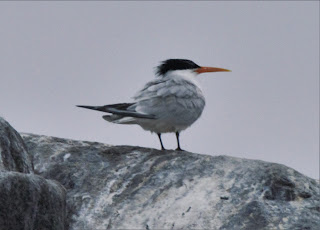 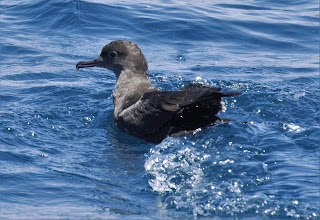 a lot of Pink footed sheerwaters 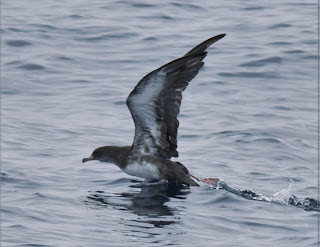 I had my best look at black storm-petrels 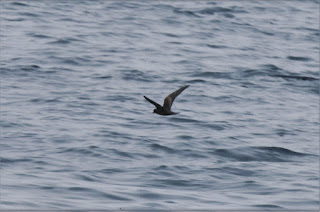 Even saw an ultra cool, fully luecistic black-vented sheerwater, we saw 4 white ones in maybe 5000 birds 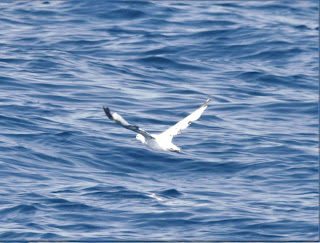 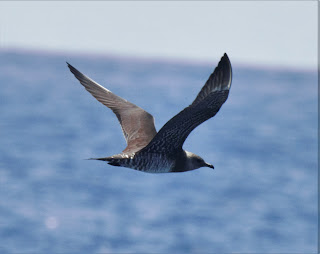 A lower 48 year bird for me (who is counting)

Earlier in the day, John Dunn called out two fuzz balls (I think that was his term), could be Craveri's could be anything... flying off when we were poking around trying to find storm-petrels out at 14 mile hump or whatever that place is called.  I saw them, thought they looked white underneath, but I couldn't tell exactly which of the two possibilities they could be, guess they could have been a third.  I moved up with my camera and couldn't relocate them.  Later when we saw Cassin's it was clear that these weren't them.  But were they Craveri's or Scripps?  I couldn't say...John Dunn couldn't say, so I just shrugged it off and kept looking.  After 3 later Cassin's we saw no alcids.  Nearby however, Jeff Bray had snapped a picture.  For a day I figured the day ended up being a lemon.  Later under scientific conditions like a computer without a glare.....photo from Jeff Bray and the trip checklist 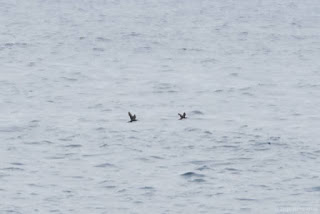 I keep hoping someday that I will see this bird sitting on the water sitting there so we can sneak up to them and get a great picture.  but alas never....never....they are always white bottomed fuzzballs flying away.  I have a lot of fantasy dreams, my wife just shakes her head.

I and I think everyone on board was impressed with a blue whale chase, the captain spotted it way off and counted 12 minutes from its dive and closed the gap.  It came up really close.  A LIFER WHALE!!!  My 16th cetacian species for the year!! 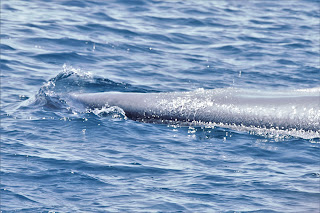 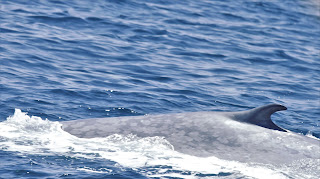 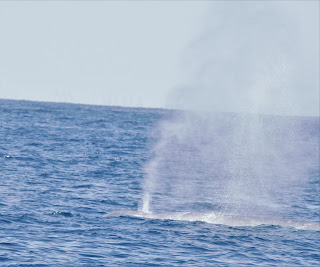 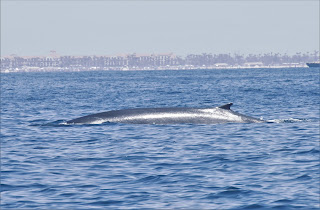 Well I had a day off so I decided to chase the berylline hummer, so Off I went to Beatty's Guest ranch in Arizona.

As many of you know, me and the Beatty family go way back, Tom Sr.s brother was a chemistry professor on mine for my term in college.  I was his lab TA in 1985-86 school year.  When a student named Scott Biederwolfe committed suicide at the end of the fall 1987 term in his PChem class just before the final exam, we all got our final exam grades adjeusted higher due to the PTSD of it all.  I was involved as I let Scott take the sodium cyanide that killed him out of the stockroom two weeks before.  I didn't realize it until after the event (I was at UW Stout that weekend speaking having the speech tournament of my career).  I got a B on that final for real, was adjusted up to an A and my A- for the class became an A.  It was the only grade I didn't deserve, and to be honest I deserved an F for that whole stockroom deal.  I was so filled with self-loathing before that exam which was the day after the funeral, I just sat there unable to open the test booklet until with just an hour left, I began.  I had realized just before I came in that I had caught the student in the area and his finger prints were found on the jar of poison. I know he would have just found it somewhere else.  My supervisor, his wife Anne at the time, was my boss from 86-88 when I was stock room attendant.  Anne died from cancer I think not that many years after I graduated.   She was a nice lady.  I wasn't found to have violated anything.  Scott was a biology TA and was not infrequently getting things in our stock room but I have lost sleep over that day ever since.   A scene from that event is in a novel I'm working on now.  It helps me to talk about it.  Maybe that was why I went into medicine?  I owed a few lives saved for that one.

I was also a study partner of Tom Srs. nephew in German class.  I have heard North Dakota stories about the Beatty past for years.  Seeing Tom in Arizona is a small world.  Tom came and chatted for three hours, as we hald a vigil for the rare hummer, which never officially showed.  I saw a black billed dark green hummer in the trees before it was chased off by a broad billed and it could have been a berylline but I could NOT call that bird.....it was never seen again.

I did point out a violet crowned to some novice birders though, they were very happy 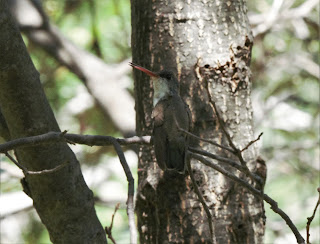 it was a female..still my favorite hummingbird..that is what birding is, sharing.
Well, I stayed so late, I almost missed my flight out of Tucson.  I'm going to go and find a chickadee, I got some inside intel.

List is up to 748, my 80th coded bird......what I said I needed to best Neil's mark which is my goal.  I still need three non-coded birds, so that will happen

number to go to old record:  1

The value of an orange is NOT priceless
Expensive for one bird......but the value of talking to Dorian, John Dunn, and Tom Beatty Sr, that was priceless
at July 18, 2016