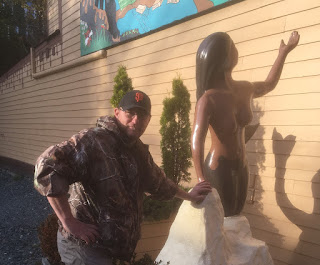 Liz Southworth, a birder from Boston I run into frequently on chases, I'm certain, thinks I'm nuts, borderline certifiable.  Liz, though, is too polite to tell this to me directly, but I can tell.

This week, somehow, I talked her into going with me to chase what was slowly becoming a nemesis bird for the two of us. Not only that, it was not a very satisfying bird to look for.  It was a pain and after we dipped out on day one of out quest, which was arguably the longest, most boring day ever of birding, I knew something radical had to be done.  I told her we had to go and say peace with the chocolate mermaid....Trinitaria, as like I said, I knew we had to do something...anything.  We were cursed, or so it seemed, and this was the cursed of all cursed birds.  The locals and even Liz told me... "Do not underestimate this bird."  Bruce MacTavish, local birding legend, told me it was reliable and to plan on two even three days...

Liz and I had spent collectively at least twelve days looking solely for this bird here in our lifetimes...dang bird!   How much "lets go to the dump, then the ballfield, lake, back to dump, scan the roof tops, ballfield, golf course, back to the dump, etc etc." etc days could a birder have?  It was driving me nuts!!  I would admit that to any psychiatrist, too.  "Doctor, it all started with this bird with yellow legs..."

"Tell me more..."  The doctor would say quietly filling up his/her syringe.

Desperate times require desperate measures.  I told Liz, she had to say a prayer too, it was either touch her right breast or say a prayer and I also said, "if we dip out tomorrow, I don't want to be blaming you for angering the mermaid by not believing."  I've had good luck with sacred mermaids over the years.  It was clear, we needed all the help we could get, it seems the weather always shifts when we both come here, and as we arrived, i did that again.  Monday was a nasty nasty day to be looking for gulls and despite hanging with local birder Jared Clarke we got skunked on the gull... so we needed to do something...

"Unless you got a better idea?"  I added.  Liz said a prayer. I don't know if she meant it but well, that was between her and Trinitaria....I only knew what I believed and to be honest, you can't handle what I believe.

Well, we went to bed and at dawn, we were back at it, looking, lurking....and then at 0759, Trinitaria delivered.

It was the morning's fourth stop in the gull parade, some grass near the dog run on Qidi Vidi Lake.  I had just scanned a group of 200 birds and decided nothing of interest was there and then out of a corner of my eye something flew in, I was too depressed to even look at it.  10,000 gulls around and what would that one gull matter...

"Olaf, Olaf, is that the bird?"  Liz said.
"Where?"  I perked up.  She gave me directions like her life depended on me agreeing with her...maybe it did?  This bird will shorten your life if you let it. 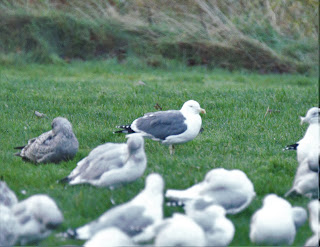 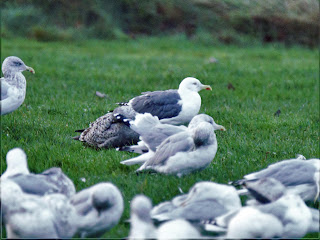 Darker mantle, bigger gony spot, medium bill, clean head, rounded head and even a look at yellow legs although the grass is too long to get them photographed well....don't they mow parks here? We both saw the legs.

We only had 5 minutes with the bird, but we were able to get closer than in the car a parking lot from across the street, we at least got out and to the fence, we got some identifiable photos, but then a dog came by and the gulls...were gone the YLGU with the group of Herrings, GBBG, and a coulpe of mutts.

It was a lifer bird......
thank you Trinitaira....a monkey was off our collective backs, a very heavy monkey with yellow feet...that was getting heavier by the minute.

Well what to do now, we wondered?  Look at the roofs, dump, ballfield, lake.....to try to get a better photo or do something else?  Get a colonoscopy would have been more fun, and well, this being Canada, there is a wait for colonoscopies so since Liz needed a willow ptarmigan, off we went.  We drive to where my lifer came from, yes, I got my lifer willow ptarmigan on the Rock.
We drove to Cape Race. 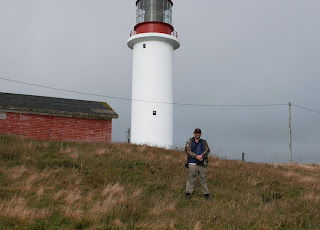 Okay, it is hard to think that I got 7 checklist rarities on ebird down here, (Killdeer is rare?)   and I also got to hang with one of the lighthose keeps, Cliff Doran, who invited us over to the residence for coffee and cake.  Cliff got the find of the year in the eastern seaboard this summer, a common swift.....swifts are rare for Newfoundland on a good day, but a code five swift, and get the bastard photographed to show the forked tail?  Cool..way to go Cliff!

So out on the cape, after coffee and cake, out looking for a ptarmigan, what do we see but a swift fly by.... 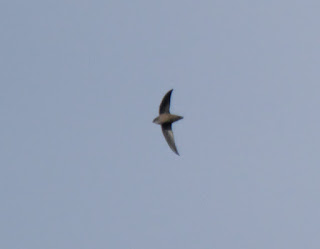 We looked and I begged, have a forked tail, some white, please...anything...we studied the photos....but I guess as we did NOT ask Trinitaria for a rare swift.....she did NOT provide....who would have ever guessed to have asked, though.  A swift, here, now?  But gosh a chimney swift though in the last week of October is a rare bird for here....and in good weather.  Go figure....?
..many of the Newfy elite birders have not ever seen any swifts in the province, now Cliff, Liz and I have something in common, to have sighted elusive swifts on the Rock....Cliff's bird though..still wow! 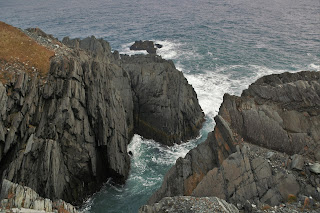 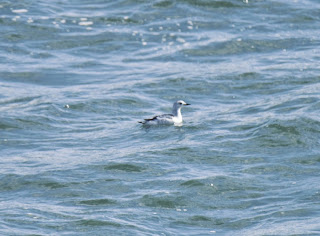 I posted the swift in the local birdng Facebook sight and I'm not sure anyone believed I saw the bird in the province....oh well,

We still had the gull, so we drove back feeling better and stopped at the favorite pub of birders and drank.....
Lifer beer...cheers! 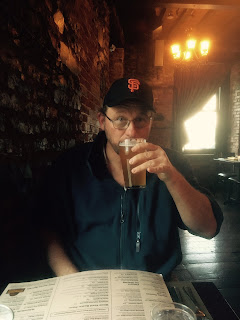 The name where I got this bird...says it all, Qidi Vidi
You may think I'm stealing a line from Sandy Komito's book on his 1998 Big Year,  I came, I saw, I counted.  I doubt the legendary Mr. Komito reads my blog...