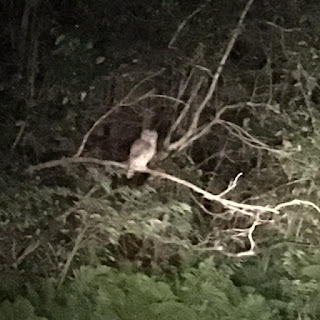 Some days, I feel like an owl in the headlights.  I am siting in the dark, comfortable and all of a sudden I have light shined on me and I don't know where to go.....this barred owl in the Everglades and me have things in common but I am getting ahead of myself.


I heard of the code five zenaida dove while seeing the common crane in Texas.  I was urged by friends to go get this bird and invited by fellow big year birder, Christian Hagenlocher to join him as he was chasing this bird and was driving south to Florida.  I arrived Midland at 4pm and in the airport rearranged my flights, cancelled Phoenix and traded a potential code 5 dove for a ruddy ground dove. I looked at the United Airlines flight to Miami, the only way I could get there that night and closed my eyes and hit the "purchase" button, burning 12,500 miles and possibly finding myself have to do some fast talking to airport agents as United always bites me in the bum....always....

I wrote my blog on Texas about what bothering me and on my mind and well I guess I offended or at least turned off some, but oh well, I write what I feel and think what I do, because that is what I have always done.....sometimes I say things I feel I must say....by the time I'm done with this year, I'm certain everyone will hate me, at least those that don't know me and that is fine...I suspect I won't need 750 birds, I may need 760, so any thought of a record is just ludicrous, and this isn't about that, .at least I didn't get a conceal and carry permit for birding...yet.  Ha..ha...eee....yeah.  Maybe I will reserve my thoughts on that.

Christian picked me up in Miami at midnight after delayed flights, and both because they had no gate agents....and we drove south into the keys.  In Key Largo, we picked up a friend, Officer Friendly, who stopped Christian, his first traffic stop ever for not moving over properly on a DWI stop the officers were making to a dude in a neon green Dodge.
We had a little issue when he asked for paperwork Christian had in a locked glove box, and....opening it was not an easy proposition.  He walked back to his car for advice from headquarters.  It could have been bad....Montana plated car, South Dakota passenger, a car full of camping gear and who knows what....it was too late for Officer Friendly and so he let us go, we could have went to jail.  Then pushing our luck, we found a parking lot on the edge of a bridge and pulled over to sleep in the car.  It was noisy but I fell asleep exhausted.  At first light Officers Protect and Serve came through the parking lot to kick us out.  We left for breakfast under the watchful eye of the Monroe County Police.
We arrived in Long Key State Park and walked the trail and found Rangel Diaz from Miami and other birders and started the search for the dove.  It did take an hour and a half to find it, but when we did, it was a ham.... 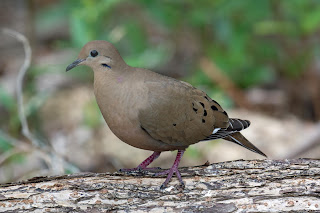 I also spotted a black-throated blue warbler in the undergrowth for another year bird.  Then we teamed up and searched for the grassquit and the Key West Quail dove but had no luck.  Christian and I then went off on our own. 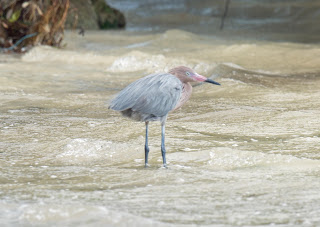 and a scissor-tailed flycatcher I counted a couple weeks back without getting a picture. 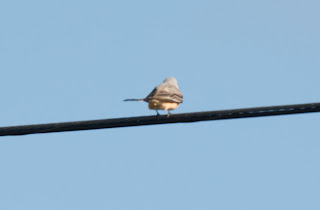 I continue to try to document and have witnesses for every bird I can, I know I can't photograph them all but I have to continue to try as there will always be ones that say I didn't see what I saw.

Over a bridge near where we slept, I spotted a frigatebird over the bridge.  It had a really odd white pattern but I just shrugged it off as bird #553 for the year...magnificent frigatebird.  Then someone reported a Lesser Frigatebird some keys south of there on the 23rd.  Was that the same bird?  It made us wonder and wished we had snapped a photo but we were on a bridge.  That was the only frigate we saw the whole time down there, too.  It may have been a missed MEGA bird but oh well, without a picture, it was just chatter and even with one, that is a hard bird to ID...and from me, I doubt I could have enough photos.  We were dreaming....when you here hoof beats, think horses not zebras...unless you are driving past the people who have the zebra on the way to the Glades and we were going there next.

We drove down to Flamingo and walked out on the very buggy and muddy Coastal Marsh Trail to call black rail and we found the spot, and saw many tracks of something, then we called them and got two great answers.  Our friends got them to storm the speaker but we were happy in the fog of mosquitoes to just get the bird.

It was my first shower in a while and a short night on the Ramada Inn in Florida City.  We had an odd dining experience at the Mutineer next door but well, it WAS food.  The morning brought traffic and more traffic and then at Loxahatchee NWR, Christian showed me the pair of smooth-billed anis, bird #5 for the trip and my 31st coded bird. 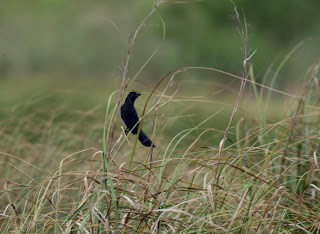 The anis were skittish and I didn't get the best picture, but well I have a wonderful life bird picture of this species so I didn't really care.

After Christian interviewed me for his birder project (he is doing research on birders) I got dropped off at Fort Lauderdale Airport for a trip home for a day to do laundry before I resume my trek out west to finish up on California birds.  I hope the added traffic to see the zenaida finds Key West Quail doves so I can come back to Florida.

As for me, I have surprisingly few bug bites that still itch.  Birding-wise, I sit at 455 birds and I feel a little behind the pace, there are good birds I need to see, and well to really have a chance at this thing for being anything, I need to break 500 as soon as I can in early March and push the coded birds up as close to 40 ASAP if there are enough birds around to do that.  Right now, I know of 4, and they have to be gotten fast.  It looks like I might have already screwed up on a MEGA frigatebird

one more look at the zenaida 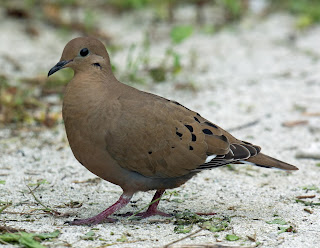 sigh....a lot of work to do...maybe an insurmountable task but I keep going ..