A Swede in a Strange Land 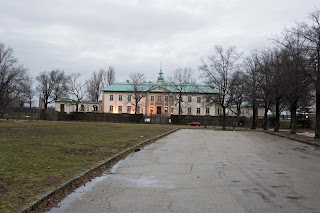 The National Swedish History Museum has sat completed in Franklin Delano Roosevelt Park in Philadelphia since 1938, even before the park had his name.  It was designed to be opened at the 300 anniversary of Swedish settlement in North America. The building's design is based on Ericsberg Castle, a 17th-century manor house in Södermanland, Sweden, which I have seen and been to.
The architect, John Nydén, a Swedish-American from Chicago, combined Swedish and American elements by modeling the exterior arcades on those of Mount Vernon. The copper cupola is a copy of the one atop Stockholm City Hall. The Museum has 12 permanent galleries displaying a broad and interesting collection combining history and culture. Three of the Museum’s 12 galleries are devoted to the history of the New Sweden Colony established in the Delaware Valley in 1638. The museum provides a wealth of information about this often unfamiliar period in history. Other galleries, ranging in style from Art Deco (my favorite) to International, concentrate on more recent Swedish contributions.
Currently, they are having a United Stockholm exhibit where some guy went around and photographed all the Stockholms in the world, even the one near to where I live in South Dakota, population, 105.  Okay, a guy going around and trying to photograph all the birds OR a guy going around trying to photograph all the places named Stockholm....who is more weird?   Then again, he is featured in the museum as a significant contributor to Swedish-American history and me...well.... then there is Olaf.  I'm never going to be in here.
Truth be told, I'm not sure what I am besides an American, my grandfather Allwin could have been a Swedish citizen, but I'm too far removed and now with Mennonite, German, and Irish blood, I'm the lovable mutt, like most everyone else here.
So did I come here just for a history lesson?
No....a bird.  I flew from Norfolk, VA to Detroit, ran to a connection, flew to Minneapolis, hugged my wife and daughter, grabbed my stuff in baggage, repacked, switched car keys, and flew to Philly last night.  A journey of 2500 miles to go 270.  Hertz was so screwed up first they gave me two cars, then the wrong car, so it took me an hour to get that straightened out and then off I went to the Airport Waterfront Hotel.  It was cheap....cheap is good right?
My room only had three mouse holes in the wall.  I am thinking the fourth was from a cable line, since removed.  They did have heat.  The thermostat was stuck at 84.  All the bugs I could see were dead...more good things?  It isn't an "airport" hotel.  The name comes from the landing of planes which actually vibrated the floor enough that the dead bugs moved.  Maybe an airplane hotel?  It was sort of entertaining...in a really WTF sort of way.  By 6, I had enough and snuck out before I got mugged or the mice woke up.
From the parking lot for the museum, I walked to an overlook and presto..... 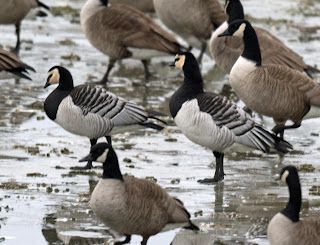 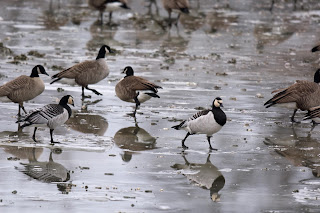 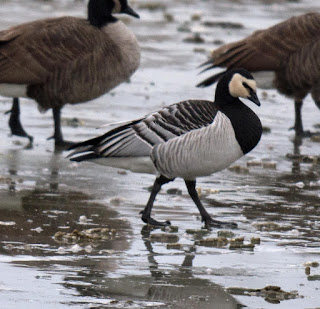 It wasn't 7am and here in the shadow of the museum and Citizen's Bank Park (home of the Phillies), I had bird number 439, a code 4, the barnacle goose. I now had one of the winter east-coast geese off the board (the other the pink-footed), although I was going to wait until fall to get them, but this goose was just too tempting.
It was then a couple of players came by.  They saw me and slammed on the brakes and then cautiously walked up the steps of the pavilion I was standing on scoping the geese.  They always kept a post or a wall between them and me so I never got a good look at them.  This was a hunting motion, even my tomcat Tiger does this.  I wasn't sure of this place or neighborhood.  You hear stuff about Philly (and nothing much good I may add) especially when we lived a couple hours NW of here.  This is Trading Places and Rocky but....I packed up my camera.  I got prepared for a defensive position and tactically retreated.  Being a big guy now with a beard....two thugs may have thought about it twice.  When I neared my car, the two got in their Bentley, zoomed past me and honked the horn, pointing at me out the window making a gesture like a gun, our maybe they were just being friendly and were software engineers....IDK.  When they had circled the lake and came by a second time, honking more and gesturing ...I took the hint and I left.  A state trooper was parked out in front of the entrance to the park, much like a military sentry, right in the middle of the street.  Hum....definitely players.        By 0720, I was back at Hertz and plotting my retreat from Philadelphia.
Note to you guys thinking of chasing these geese.  They are easy, just 5 miles from the airport.  Take Broad north (exit 17) and access is from the north of the park, but be careful, not sure about the safety here.    A bird isn't worth a mugging, or worse...
All I can say is these two barnacle geese and I were Swedes in a very strange land (Philadelphia).
Lifer beer for breakfast?  #731

PS an update.  As I periodically like to do, I spent the ride back from Philly auditing my year list.  I keep a list in triplicate.  I use Ebird and try to post checklists real time if there is cell-phone service, occasionally, I use shared checklists from pelagics and others, and I also keep a manual checklist using the January 1 ABA checklist.  My third plan of attack is to list the birds in my diary sequentially.

When I was doing my first species audit, I noticed that on my checklist, the wrentit was absent which I photographed in San Diego, when I compared my checklist to Ebird, I noticed that in the Lower Florida Canyon somehow, and I don't think Laurens Halsey misses to add a bird to a checklist very often, he omitted a painted redstart to the list, which I failed to notice when I imported that checklist--a bird I also photographed although poorly.  We were talking to Christian Haganlocher at the time and were distracted, sorry Christian.  So that is plus one bird on both counts, I had also on my sequential list elsewhere and the ABA kept the Flame-colored tanager as a provisional and I don't think there is any doubt that that is an immature non-hybird, so due to that, I am revising my list up to 440 total birds, so that all of my lists are the same here on February 16.  My January total is then 406 birds which I still think is a record.
at February 16, 2016