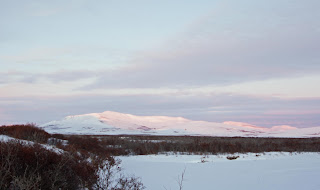 What do actor Willhem Defoe, naturalist Charles McKay, and Olaf Danielson have in Common?  Probably not much but we were all born in Wisconsin, actor Defoe and McKay were both born in Appleton and I, strangely, have only ever been in Appleton once in my life despite going to college 45 miles from there, but I had the worst case of food poisoning ever and was dumped out of a Northwest Airlines flight there in March of 1988 (my 22nd birthday), before being picked up by 3 drunk college friends in a 1969 Corvair (maybe the most dangerous car ever).  All I remember about the trip back to school was somebody deciding to take a shortcut through a picked corn field, maybe it was a hallucination.  So I guess all three of us survived or time in Appleton to strive at other things.  The learning point of that experience was to never eat Thai food in Scottsdale.  Gosh I could write a book on that trip....

Charles McKay...one of the mystery people who has a bird named after him.  After finally getting his Bachelor of science after attending no less than four colleges.  I think he graduated from Butler, although he had stays for sure at was to become Lawrence University and Cornell.  He volunteered for Army Signal Corp duty, was stationed in the Bering Sea and observed a very strange, almost all white bunting, in 1881 or 1882 which now has his name attached to it...the McKay's Bunting.  Oddly at age 28, in 1883, McKay went on a kayak trip around the corner to see if he could see something.  He was never seen again.  There lies the mystery?  Did McKay move in with the native peoples?  Did he drown?  Did he get eaten by polar bears?  Maybe he even got pecked to death by Eskimo Curlews, which cause them to get an error in the DNA eventually leading to their demise?  Nobody knows, his story then just abruptly ends....

Since I was in Kodiak, I flew up here to get this little "monkey" off my back.  Nome is near Kodiak correct?  That is like saying Oklahoma City is near Minneapolis, but it was closer than coming up here solo for the bird and it is only getable in the Fall/winter as otherwise largely the bird is confined to St. Matthews island, a place no one can get to except for the rare tour.

I have been accused of being too negative about Alaska, even though my wife texted me and said my comments were dead on, she watches house hunters-Alaska and thinks everything is built ad hoc.

So let me say in defense of Kodiak, which I still reserve judgement on, the weather could be worse a major Pacific storm is hitting it today/ tomorrow with 55 mph winds and real rain, not the irritating rain I saw, and I would be stuck there. Like they were getting so much that the weatherman didn't want to predict the final total.  Nome is looking better and better, and to be honest, it is only 20 degrees ABOVE here, much warmer than I planned and expected.  It was a very nice day here yesterday, even very little wind. 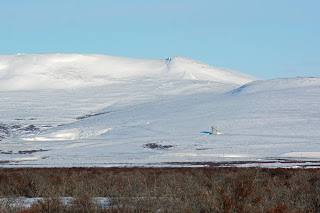 I sat next to an elderly native on the cab ride to the hotel and making conversation said it was "balmy" outside.  She didn't understand the term, I explained it.  Then she went off on a tirade against people in bikinis, and scantily dress.  Se said they might as well be naked, then asked me if I agreed, well I did, but she didn't realize what she was asking me.  Then I said I was here to see a bird.  Then still on the anti nudity or at least anti-bikini thing, she then surmised that it would be like me going naked around Alaska seeing birds.....I wanted to say, yes, I have, but well I just smiled as did the cabby.  She got out and said that I should fear the Lord, and well it was so nice out, I couldn't help but smile.  It is always good to get advice from our elders.

But don't let the blue sky fool you, this was no beach vacation in bikinis or less as the pack-ice has formed and looking out towards Siberia, all one sees is ice 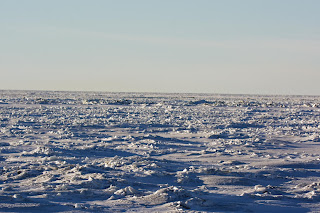 But as it was a nice day, I decided to go as directed and scope out a feeder in a place known as Icy View, which isn't marked as such but eventually through trial and error, I found the place.  The feeder was empty but they had thrown seed on the parking lot. 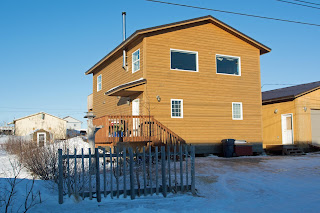 I always feel like a criminal when I'm staking out a feeder in a strange place.  There was abosolutely no life around for birds except a lone raven.  It sat there in the cab of the rental jeep and waited and waited and then out of nowhere, a bird appeared. 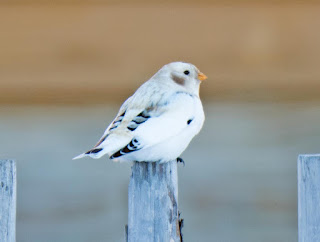 White back, lighter color, it was it.   #413  McKay's Bunting.  One of 6000 of this species and I was looking at one and then it went to feed and a couple more appeared along with a single snow bunting.  Then they spooked.  It is hard to imagine how flighty these birds are and it took 20 minutes for them to cautiously come back. 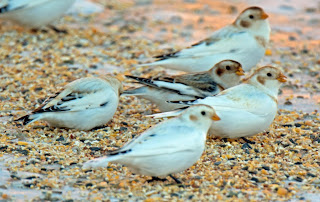 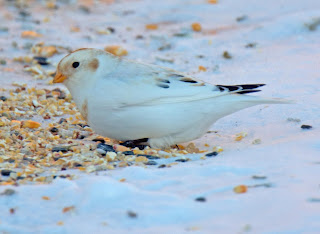 Then the local dog came, as he had had just about enough of me, the birds flew off and he sat defiantly at the tire of my rental,  Birding apparently over.  I did come back later when Fido was gone but then the family to the house returned and they gave me an unwelcome look so I left.  I drove around and staked out the cemetery, another feeder in town, and saw absolutely...nothing.

I did see them in the morning though and have to put in this picture, McKay's Buntings on a powerline? 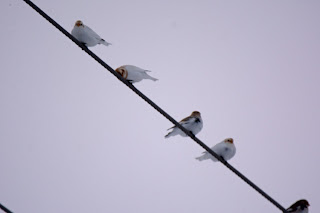 there looks like two flocks up here, one mixed and mostly McKay's and the other all Snow buntings so if you come, remember that and the feeder in town is active at first light, when the traffic starts to move, they get skittish and don't come back.

I then went off to a bridge someone had seen a boreal owl commonly and waited to as late as I could before a dared drive home, and again, nothing, well 37 rock pigeons and three more ravens.  The roads around here are like driving on a frozen lake which I spent the better part of my youth negotiating.  One doesn't make sharp turns or stops and things work out, but lakes don't have hills and I'm a little leery of driving up glare ice on a hill in an unknown car.

Let me say another positive thing.  Unlike my car in Kodiak with a critical warning light on, the lights on this rental Jeep when I got it were only for a low front left tire (which clearly had some air in it so I ignored it like the owner) and for it to change oil.  I vast improvement.

The hotel I satyed at Dredge 7 Inn had both hot water and towels, so no complaints there.  It was a bit quiet, and there is no receptionist, kind of a help yourself kind of place but that was okay.

I did have some social interaction, running into the new mayor, Richard Benneville in Anchorage, the man who makes the colorful city of Nome even more colorful.  We met last June when he was just colorful and not in the political hierarchy of the city.  He says he likes his new job.

Dining in Nome is always an adventure.  It was nice to have choices at the "Husky" which features Japanese fod, as well as Chinese and American.  I made a joke about the hamburger not being of a husly and the woman didn't understand English only Japanese.  As such I ordered tempura halibut.  Sushi here.....no wasn't that brave.  I have something cooked.  So eating some of the plainest cooked Japanese food I have ever had while listening to a very racist Mac Davis (co-star from BJ and the Bear, he wasn't the chimp either) song from the 1970s, (something about the Japanese taking over America) I found it good the poor woman only spoke bad English, she wasn't offended by the music she had undoubtedly put on.  I would have had a lifer beer with it, but she explianed to me they had lost their liquor license?

To do so in Nome was undoubtedly a story worth hearing but alas. I couldn't speak her native tongue.  I wonder how she got here and why?

It was good that I didn't get food poisoning, and I awoke to darkness at 0800 the next day and at 0930 it was snowing and still dark.  The woman came by to clean rooms and advised me that if the plane got cancelled tonight, my room was still open.  I asked about that and found out it was quite common.  I had wondered why I had built in some needless extra days but today, I wasn't sure I'd even see the road let alone see a a bird and maybe they would never let me leave?  IDK.

Texas was calling, but as the first local woman said, "Fear the Lord" and I knew then that living here is controlled by a higher power and only the Lord would determine if I was allowed to go to Texas from here or not.  I think I'm trying the Polar Cub for breakfast, I should spread my luck..I mean money around.

Stay warm and if you don't hear from me (not unlike McKay), send up a search party, I'm in Nome.
Maybe I can tap my heels together and say "there is no place like Nome"  and I will magically be transported to Minnesota?