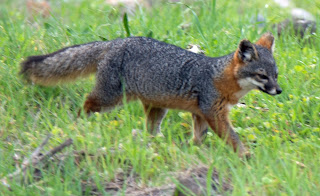 After a near crash of Southwest Flight 578 in Midway, I took a couple of days off before trying this again.  I was shook up but like everything...it passed.

As I headed to the airport on February 26, the birding song came on the radio, it was play of Ex's and Oh's number 78....it was a good sign.  We were heading west, California, and we were Getting the Rhythm and this trip, my son, Allwin, the one that damaged my car had to come with as penance for the insult to my car.  Allwin is a traveler but no birder.  I had been looking forward to this trip for months since he has been abroad studying since May and we needed time to bond.

My Favorite Johnny Cash song is Get Rhythm, which was released in 1959 by the artist.
here it is,

Also in 1959, Johnny Cash decided to go fishing.  Unfortunately while driving up a mountain pass in the Las Casitias NF his truck overheated or so he said, and started on fire and Cash just took out his fishing stuff and still went fishing, ignoring the inferno.  In the forest fire that ensued, 49 of the regions 53 California Condors disappeared or 50% of all of them and were never seen again, no one knows if Cash actually killed 1/2 of the condor population in order to get a few trout...but he was fined a million dollars although no one knows exactly how much he paid.  Cash oddly started a second forest fire in 1965, one in which he almost died....Cash and the ring of fire....odd, well as as far as I can tell, the condor is countable now so this was designed to be my Condor trip.

Let me do a little provisional discussion here

Provisional 1A.  I have counted the hoary redpoll and if as expected, the AOU lumps the two redpolls together, and the ABA drops it from the checklist, as per the rules, I get to keep it.  The example used was the Northwestern Crow but it is on point. http://listing.aba.org/big-year-rules/


Provisional 1B.  My counted western scrub-jay is a "Coastal" or California subspecies seen in Irving, CA, on Martin Luther King Day in January.  On February 19, in Davis Mtns Texas, I spotted a "Woodhouse's" subspecies so if it is split by the AOU, and this is also up to a vote, I will add one via the old armchair tick, we will wait for their summer checklist changes.  No other splits/ lumps, look to affect the checklist this year for me.

Allwin and I drove out to Merced NWR after some concern over bedbugs at the hotel in Merced, I am not sure if it was real or a mass hallucination.  A day later I had no bites.  We got there at first light and found the pond the Ruff, a sandpiper, had been seen even the day before we got there...today...notta...dip city...nothing...no ruff.

we gave it three hours and even endured NWR Rangers yelling at us for being more than 25 feet from out car, we were about 50 at the time.  I was trying to get a better angle on a shore of the pond but I just had to move the car and block traffic and THEN get out to look through my scope....why?

We saw the hoard of Ross's Geese and decided to punt. 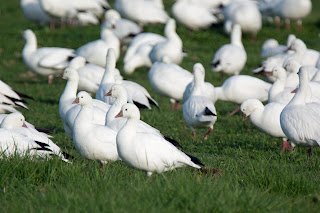 we'd have to return another day.

I studied the map and this road looked good, it went from I-5 to Hwy 25 and had all the requisite ticks of birds I needed, so after cruising through the farms of the San Joaquin Valley we found the road and quickly it changed to dirt.  All along the road, people had set up makeshift shooting ranges, it was sort of odd in a way, even to a gun owner like me.  The road got worse but stayed okay and so we kept going.  Finally, I came to a year bird on a fence. 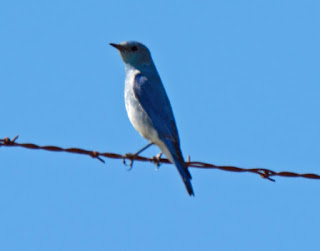 always a pretty bird and then we continued on, got across ruts and then we came to a water hole.  Allwin took his shoes off and waded across, it was way too deep for a Ford Fusion.  This is the second time water has impeded my progress, damn.  Maybe a SUV next trip?  Two hours later....we were back on this road.  What a detour...I did drive past a hot springs that looked interesting.

The second stop was near a ranch, and I found my first key bird for the trip 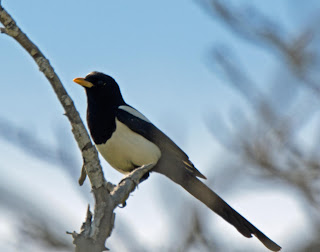 Nothing to say about this but tick!  Then we got behind a camper pulling a Jeep.  It was 10 mph for a while, but it all worked out when I saw blackbirds near the end in some trees.
The right blackbird... 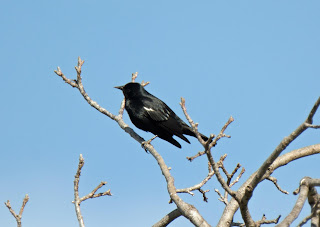 These birds have a red patch on their wings which they frequently hide, and all of these birds in these trees hid theirs.  Things were starting to roll, I had the two birds I needed and so off we went in search of Cash's cursed Condors

In 2014, the ABA clarified their rules on counting Reintroduced endemics and if the bird is found in its former range (like ever or in the last 200 years?), and the population (not defined) has reproduced (how many?) it can be counted.  This rule only really covers 4 species, so the ABA could have just discussed each one separately, but they didn't.  Also, Condors live so long that ones taken into captive breeding have since been released and for a birder like me, I don't know where these birds are and so that is the third part, if unable to know which can be counted and which can't they can be counted. I feel I need a PhD in this bird to understand how to count it.   So I think Pinnacles Condors can be counted.  I have made my best effort to decipher it all and if I need correction....say it! 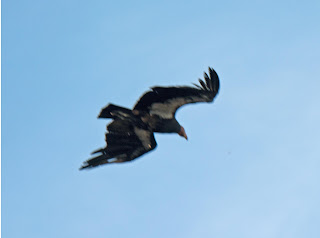 My son and I had a fly-by so close you could hear their wings.  It was cool.  We saw 6, even one way out of the park feeding on a dead something in a field, and as such...it was Allwin's rarest bird.  We had a really nice hike up here.  I really like this park and the valley near here.  It is a cool place that makes you think of Montana, not California. 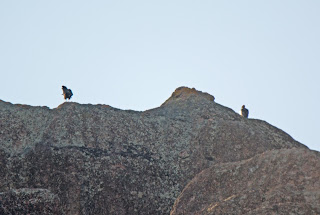 We heard 2, and to show my son, that was their call, I played it and instantly one answered me down below me in a little draw.

As it got dark, we drove out of the park and had to make tracks for Ventura, 200 miles away.  Driving between the valley and Hwy 101, I flushed a common poorwill at 10% light, it flew in front of my car and I didn't hit it!  I could count it even if I did but who would want to?  bird #461.

We drove like maniacs as my son directed and then he told me he had a short cut.  It would save time and miles as 101 makes this loop before turning on the coast to Santa Barbara.  It was just as we were coming down the mountain to 101 again when the traffic just stopped--apparently a terrible accident.  We waited.  It was after a few cars turned around and went back up, when Allwin told me he had another shortcut so we turned and found San Marcos Road, it looked on paper to go directly to Santa Barbara...problem was it was a 10-12% grade down....narrow, tightest turns ever, most marked at 5 mph and with the grade, and total darkness, my headlights were too high and as many cars from town were coming up to avoid the bypass, it was beyond treacherous.  Allwin stated that the Saint must give out medals personally to whomever safely makes it to the bottom of this road.  That was one road, I never ever want to go on again, even in daylight.

I am not Catholic and I kind of wanted to say a little prayer to old St. Mark

This isn't my name for the ritual to come and see this bird only found here, but three years ago, I said, I would never need to come back here again and three years to the day, here I was, taking a Island Packer boat in rough seas to Santa Cruz Island, but it was a Big Year and I had to go.  It was really rough this time....

Everyone writes how easy it is to find this bird...IT IS NOT THAT EASY!

In 2013, I spent three days at Scorpion (well I had clothing issues to worry about too) and I only saw 5 of them, and this time we had to hike and well...we saw three, and only one was photogenic.  We were the only birders there is we had no one to complain to BUT I found the bird... 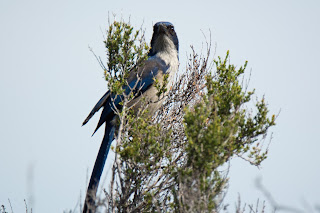 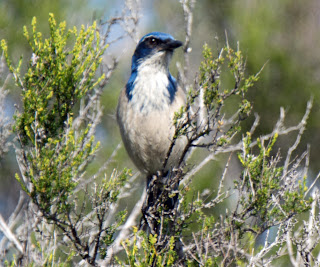 I don't know if it is just me but this bird never is anywhere near the landing spots.  We came to Prisoner's Harbor because it seemed that this area had more of them but alas no.  It was a good hike though, to Pelican Bay. 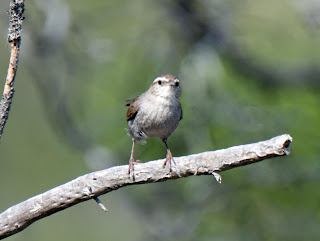 After the fist bump when we lEft the jay, Allwin said, jay down fox to go.  I then saw a fox come down the trail to us.  "We need to find a fox."  He said again. 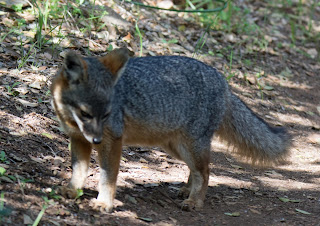 well, we had the big blue tick and the big gray tick, but as we weren't counting mammals, we had nowhere to mark this tick.

The ride home on the boat was better and flatter and there was a veritable pelagic of seabirds, lots of Scripp's murrelets and a pink-footed shearwater plus all of the other expecteds...unfortunately having done a pelagic near here a month ago, there was nothing new for me to tick.

We got back, drove to In-and -Out Burger, and drove to Glendale.  The blue tick in my book and now my count up to 462...then Elle King sang her little song and I sang my own words...


Well, I had me an owl, turned up a common crane
I just scoped all the birds that no one could believe
Whoa, and then I had to go
Now, there's one in California that's been easily tame
'Cause I found me a better bird out in the A-K
Hey, hey, until I made my getaway
One, two, three, they gonna fly up to me
'Cause I'm the best birder that you'll ever gonna see
One, two, three, they gonna fly up to me
They always wanna come, but they never wanna leave
Ex's and the oh, oh, oh's they haunt me
Like ghosts they want me to see 'em all
They won't just go
Ex's and oh's


Now I don't have any rhythm but If I could get someone to sing the parody, I'll make it into a music video.......anyone?

X's are successful ticks and the O's not seen birds that haunt you...AND ME!

Okay, Johnny Cash, this song is for you, the man who hates birds...