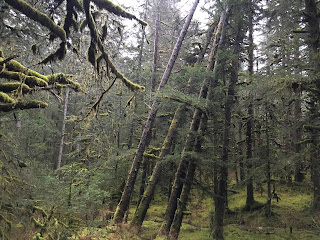 Kodiak....?   I don't know what to write.  I've never been here before.  Is this an outdoor mecca and wildlife wonder land or just a wet and gloomy place that smells strongly of fish?  Is this the perfect place to get away from it all or a place to be eaten by bears?  I don't like bears, and I was relieved when I read that even here, the not so cold part of Alaska, the bears hibernate....whew!  I still found myself looking suspiciously at tracks, had the feeling I was being watched, you know wolverines and wolves... 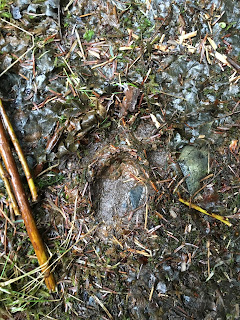 here was a fresh one I found...but they don't have wolverines and wolves......It is just a dog track.

But just when I determined it was safe to be outdoors, it began to rain, a big old fat rain, and then a little light to heavy stinging rain, and then for a while it seemed to even rain straight up, to steal the words from Forest Gump..  It was a heavy rain for two days and it also blew the whole time.  It was a tough go...

It is a funny thing with bird chasing, when you get to a place, you start to think you should have went to another place.  While here, and enroute, rarities showed in Texas, Massachusetts and California, but I was committed to Alaska, and Alaska in winter, and I'm sure the armchair quarterbacks out there think this was stupid place to go.

It was really a haul to get here, 4 hours beating a blizzard to Minneapolis for a 0630 flight to Seattle, 3.5 hours more to Anchorage and a connection after a 3 hour layover to here and enroute I was unsure if the birds would even be here, probably froze out as it had gotten cold.  Then the woman at Avis grilled me that I would be charge lots of money if animal hair, blood, fish guts, fish, animal parts, etc etc would be found in the car. I had to sign a waiver and then another waiver I didn't smoke, and then still another waiver I didn't read, but maybe it was that I didn't smoke fish....Finally I got the car.

I was dog tired, and it was low light and I couldn't figure where to even look for this bird, you see the name of the lake is confusing, one thing locally another on Google and still another on the sign.  It sucked and I was tired so I packed it in and just tried to find my bed and breakfast, then lost I plugged it into Siri, still lost, I called the woman at the B&B, still lost, I finally stumbled to it.  The street it was on looked like an alley.  I hadn't noticed the sign.  I was out of it, but the Crank Crow as this woman calls her basement, is fine.  It was all you needed, well all I needed.  It is hard to judge B&Bs, some have formal breakfasts and this one had a kitchen with food in the fridge. 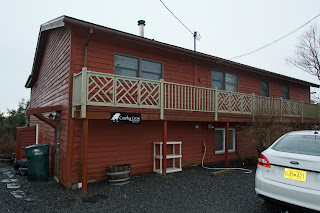 again, I don't know what to say.

I would like to say some things about Alaska in general.  Alaska is a place that seems to be put together in a hurry.  Everything here, Nome, and even Anchorage, is done just good enough to get by.  There seems to be no planning for the future.  Things are built cheaply, and haphazzardly.  Every place, even those that don't need to, have that boom-town feel to it.  Alaska doesn't like signs or at least big enough ones for us who don't live here to be of much help.  The only drawback of this Bed and Breakfast is that the down spout of the eve system unloads right on the door to your room and since it always rains, this is a problem. 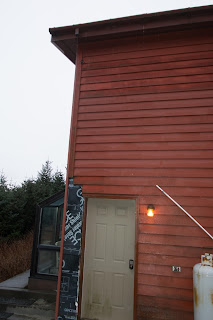 And not finishing the siding under it and since the prevailing wind hits this wall, it will be more than your head that will eventually be a problem, but this isn't the owners fault really, the whole town is designed just good enough.  They have their container port, right below an unstable mountain face, that when the big earthquake comes, and it will as it has before, there is I bet a 25% chance the slide will take out the whole terminal.  Then as they don't have room for the containers here, they have to truck them off site in two directions, so they have to load and unload them twice.  There is a hundred percent chance in an earthquake the road will be taken out, so whose bright idea was this?

There is NO city planning--parks near industrial sites, schools all over, and streets well wherever they got put.  The constuction of houses, etc, looks like a building inspector's nightmare.  I know that Kodiak was a backwater until 1941 when the military hastily fortified the area to protect from the Japanese invasion but heck, the was 75 years ago.....this isn't a boom town.

I went to Gibson Cove just past the container terminal and found two year birds and a lifer, the gorgeous Steller's eider.  The place really smelled like fish, almost overpowering.  It was a good start though. 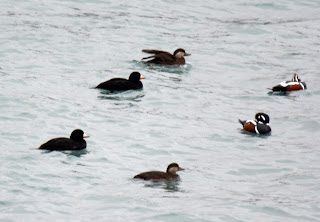 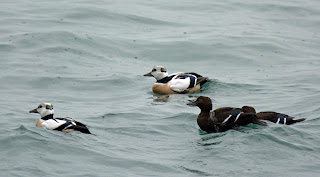 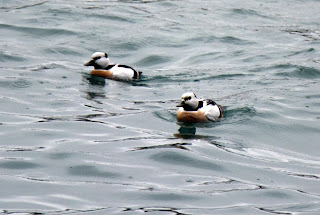 Then I worked again at this lake problem, which one of the four was THE lake....one lake had nasty Coast Guard keep out signs, then a nasty Coast Guard Police cruiser, so I went where it had to be. Geniveive Lake on Google, Boy Scout Lake by local lore, and the sign says Margaret Lake... 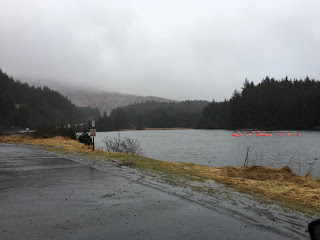 IDK what it was called but between the rain, patience, luck, an eagle eye, and sneaking to as close as possible, I found the goal bird, the Common Pochard.  They spent the two days I was here, they being her, 14 ring-necked ducks and two female greater scaup tucked into the far right corner of the lake.  But I had her and got a picture too.  Which wasn't that easy. 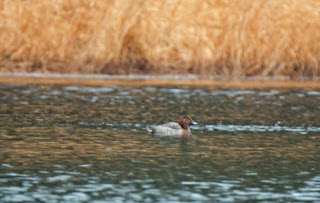 I tried to walk closer in the woods side and got spooked by the track but did get a pacific wren.
Too wet for pictures 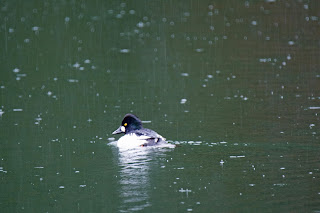 You can see the rain, and this was tolerable light stinging rain.

I then went past the coast guard base to Woman's bay and found a couple of year birds
My favorite goose. 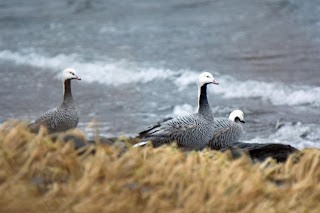 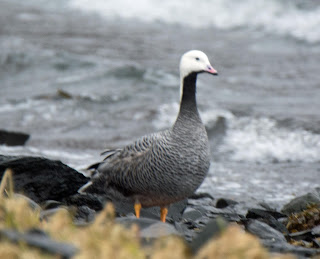 they are so handsome...

#411 Rock Sandpiper
there were about a 100 feeding at low tide on a point. 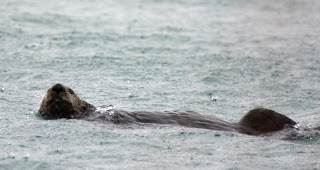 So then I spent the second day trying to call in American Three-toed woodpeckers, but all I called in was more rain, apparently.  I saw very few small passerines, maybe 7 wrens, and that was it.  Then Rich MacIntosh, the local guru, who was comfortably in Hawaii, the man who found the pochard had also seen a tufted duck on the 17th and presumably it hadn't left, but it was a female.
I have great photos of my life bird so I just wanted to see it but where?

I tried to get on Buskin lake and agsin found the police and then I waited out the weather and then looked at every nook and cranny of the other lakes but no scaup with a tuft.  Finally, a little angry and now really wet, I went all the way to the back of Buskin Lake by road to near the golf course, yes they have one, don't know if anyone uses it. 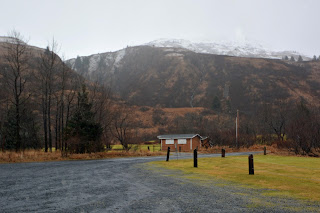 as you can see the cloud move up so I could see a little, they have mountains here!  Since this is a bigger lake, I needed better visibility as it was certain if I could ever get to the lake i wouldnt be near the duck.  Then I sloshed across the driving range, through the mud, found a trail, and somehow surprisingly got to the lake.  I looked and then found the flock of scaup maybe 200 yards out, then spotted a smaller scaup with a tuft on its head, tufted duck...bingo.  Too wet for a camera and too far and low light for digiscope, heck, lucky I even saw it clearly, but I did...and it is a code three.  I looked for my two friends in the Coast Guard Police Ford Explorer and quickly retreated to the car. I was happy third coded bird of this trip

Why do I feel like I wasted a trip?

Besides the birds, I remained entertained watching the goings on at the US Coast Guard base.  I almost wanted to use my military clearance to get on the base and bird but there was nothing I could think of that was there so I sat on the road and since the cops were on to me, I thought better of it.  They had a ready plane with its engines running frequently I think ready to go and rescue someone.  It did make for loud background noises while I was sorting scaup for a tufted duck to no avail before I found it elsewhere. 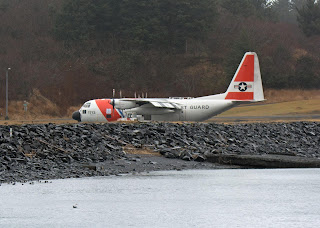 They also were practicing using the helicopter to blow a boat in a certain direction as shown here. 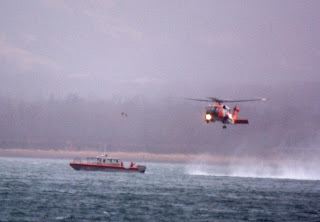 Again, not sure what to write. I can surmise...cool birds, bad weather, ships, and planes, what else could a Bad Weather Big Year birder want?

Then there was the Tsunami warning.....almost forgot about that.

I was about four miles from a hill at the time in a tidal marsh.  The words oh F%^K! came out of my mouth.  I was maybe 100 yards from the car during the only time it didn't rain. The only thing worse than bears...tsunami......oh wait, maybe it was just a siren test.  I don't know.  Scared me.  I bird on pins and needles in tsunami prone areas.  I texted my son if there had been any large Pacific basin earthquakes and before he got back to me I decided to head up to bird away from the low bays.  The 2.0 earthquake that had happened in Anchorage wouldn't cause a splash in a bathtub, so it was just something else.

I would like to thank all of you followers out there in keeping up with my travels.  As of writing this, I've had over 680 views of my blog titled "Iowa."  I don't get paid anything from this and as you see, besides my own novels, I am advertiser free, but again I'd like to thank you for your support.

Remember what a friend told me, if a tsunami is really coming, "Run, Forest, Run!"  ...wait, I think he was describing my bird chasing....I guess it works for both.  Am I Forest Gump?  I hope not.