Clean up in Aisle 1 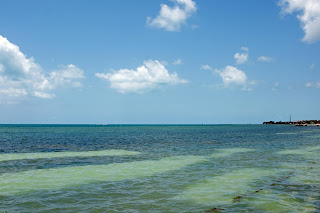 I was in the old SuperValu in Grantsburg, WI where my pike fishing partner used to work.  Suddenly I heard a phrase overhead, "Clean up in aisle one, clean up in aisle one!"  I ignored it, and then this old woman appeared, all bug eyed and she wore one of those hair nets you only see on high school cafeteria cooks and servers from like decades ago.  She pointed to me.  "I said boy, Clean up on Aisle 1!"
"I don't work here." I said.  I never worked at that grocery store.
"Don't make me get my broom, you'll be sorry"  She said.
Okay, I'll clean up aisle one.  I looked but there wasn't an aisle 1, the place started with 2.  She was following me and then I heard an alarm, it was my alarm.  This was a dream.  I needed to wake up.
I sensed a bright light shining on me.  I opened an eye.  It was a street light and it was dark.  I could hear  a breeze but where was I?  I came to and looked out the window.  I tried to focus on a boat trailer, a guy was carrying something towards a truck.  He put it in back and drove off.  I scratched my head.  "Where was I?"  I got outside and stumbled to the front of my Dodge SUV I was driving.  I looked at the plate.  Texas!...?  How did I get back to Texas?

No I wasn't part of my fictional novel of the bad big year, and I wasn't really in Texas.  I looked at the sign on the boat ramp.  Monroe County...."Crap I'm in Marathon, Florida."  I shouted as it all came back to me and jumped into the car. It was 0605.
I had landed in Miami at midnight and then I stopped at every lighted area I could to hear nighthawks, finally at 0300 in the morning or thereabouts, in a restricted parking lot for the support area of Marathon;s airport, I heard the stuccado of the Antillean nighthawk.  All I got in Key Largo and thereabouts were common nighthawks.
What I don't get in nighthawks is how the Lesser sounds like nothing else in the whole family, Commons and Antilleans sound sort of the same, one a continuous buzz while the Antillean cousin, is stuccado for lack of a better description.  Despite 6 years of piano lessons, I have no musical skill at all.  Don't ask me for descriptions, little birding song remembering tools make no sense to me, they never did.  I'm a photographic memory guy and have an ear for nothing--hands like salami, and ears like potato sausage would describe me.   But I had this bird and then after getting thrown out of what turned out to be a taxi cab only parking or sleeping area, I found this boat ramp and crashed.  Nothing like sleeping in a car to make for a good birding trip.
I got some coffee and went back to the airport using the usual parking area and heard two more ANNIs the abbreviation for my quarry before it got light enough for me to move on.  Finally I saw one way out and it was up there but wasn't sure if it was singing or there was another one singing I couldn't see. I had the bird so I guess it didn't matter.
I found out about the roseate tern hang out at the Monroe County Government Center by accident, I hit the wrong button on ebird and got them to come up instead of the nighthawks in Marathon.  30 terns at 0715, yesterday interested me.  It was three miles away.  Siri took me in loops before I realized the map on my iphone was for the government center and Siri was directing me to Government Plaza on Monroe Ave in Miami or something like that.  I figured this out after three u-turns on Hwy 1.
Three miles finally logged and then I pulled in and parked.  I looked up.  Roseates in the air.  I counted 26 of them.  It was bad and low light but I could even see the pinkish hue. I didn't know if they nested here or what, but they were here.  It wasn't breakfast yet and I had cleaned up my two missing Florida Key birds I missed last week.  I guess I was cleaning up on Aisle 1, or Highway 1.  Fort Zachary Taylor opened in an hour and I was 48 miles away.  I needed to go.
#610  Antillean nighthawk 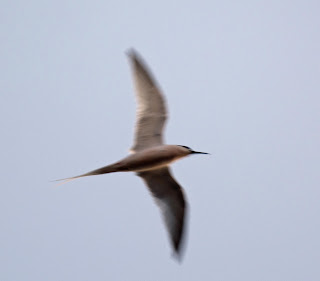 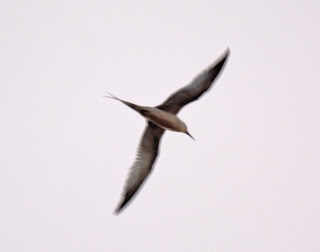 Sorry, my pictures are so bad, but they do look pink to me.
I don't know what was going on in Key West.  It was a bad driving special.  People stopped short, pedestrians were standing in the road, cars turned late, and everyone was swerving for female joggers in tight things loping on the sidewalk, especially me.  I need to go home.
Well, the success ended at the Fort.  The Cuban vireo, gone, poof.  There were some good birders there including Chris Feeney, who blew in from California a day ahead of me, having nabbed the Marsh sandpiper, unlike me.  I'm sorry to report, the most interesting bird was this common ground dove chick. 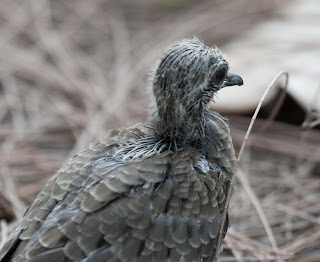 There was a raptor fly-over, which the ID of which perplexed me, as I was tired.  I was trying to find a new warbler which didn't happen.  I didn't want to think about this hawk. 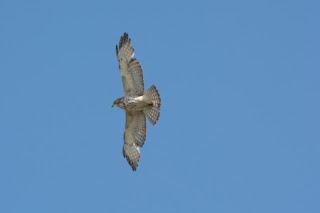 Okay, now I'm interested, what is that hawk?  Here is second picture. 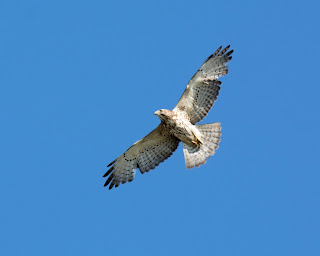 It has to be a red-tail, no bands on tail for anything else, and it was pretty light on top, I live in this world of Kreider red-tails and find they look weirder and weirder....although some short-tailed hawks have pretty faint bands on their tails here is a picture from internet...hum....now I'm rethinking my opinion. 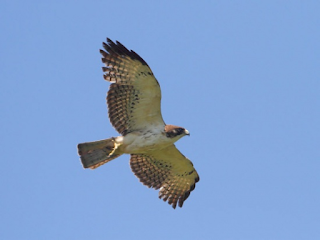 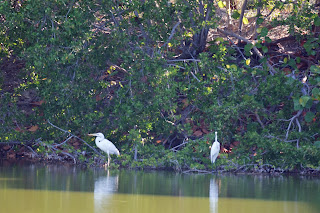 It sure seemed that there was a disproportional ratio of more women then men at the beach, and as I caught myself staring, I decided at a little after twelve to pack it in and head for the airport.  I bid "Good luck! to those who stayed behind.  They'll going to need it.  The bikinis are in a full distraction mode and seeing the vireo is tough enough.

It was a bit satisfying though, my best year was 2013 when in the ABA along with what i was doing by my au naturel big year, I saw 610 species of birds, I have now bested that by one, and it didn't take 4 months.  The sky is NOT the limit but despite my somber tone lately I'm on track.  I don;t like missing short puts, good pike hits, or free throws either.