The appearance of the Jackalope 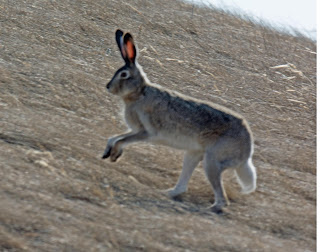 There are rare birds and then there are rare animals.  Although this big year is all about the birds, one needs to stop and smell the roses sort to speak and when you see a rare animal you stop and take notice.

The jackalope, one of the west's most mysterious creatures.  Once reported by Native Americans and early explorers in the 1850s from north Texas northwards in the great plains to the Canadian border and also was found in patches near the Sierra foothills.  However the population dwindled and in the last 60 years, the population became localized in only two areas, central South Dakota and a small area of critical habitat in eastern Wyoming where they are still being seen. Unfortunately, a huge taxidermy market opened up in the 1960s and 70s for stuffed jackalopes with upwards of 20 or 30 being put up for sale at a time at tourist stops like Wall Drug, The Corn Palace, or many of the places in the Black Hills.  This hunting took a toll on the species and so now seeing one is exceedingly rare, as it also became a sought after hunting trophy for rare game hunters like the picture of this woman, taking one with a bow.  Taking a jackalope is now one of those once in a lifetime events. 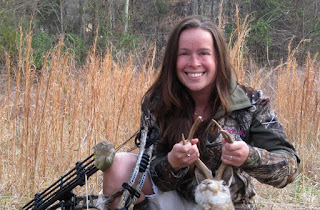 It had been a long time since I saw one.  After spotting a Harris's sparrow this morning out my window at my house, I eventually drove out in easterm Day County, South Dakota looking for chestnut collared longspurs in a very heavy wind.  Finding anything was going to difficult and lucky.  Imagine my surprise when I jumped a female jackalope.  Although the bucks are notorious for being aggressive, the does are usually shy especially in the winter when the does loose their antlers.  However, there is one period of time when the plains are not safe...jackalope rut.  There are some animals I don't ever want to run into, wolverines, cougars, grizzly bears, a cornered badger, and..... a doe jackalope during rut for about a week in early April.  Luckily it is a very brief period of zany craziness out there.

Just seeing a doe jackalope is akin to seeing a unicorn, some even think of them now in the mythical sense, and I am lucky that I even saw one today.  I am also lucky I didn't get hurt.  During this period these odd creatures don't run and they don't hide, they frequently charge, and end up trying to mate with anything they can, be it a dog, a leg, or even sometimes a fence post and if they aren't satisfied they bite, claw, and an unsuspecting unlucky few people out in the prairie get seriously injured and frequently they don't even know what attacked them.  Although the breeding habits of jackalopes are poorly described as there are few researchers, it is believed that the bucks have horns solely for the protection of fighting off overzealous does or they are used in some elaborate mating ritual.  Much like yellow rails, no one really knows much about them.

I ran into this rutting doe and it seemed to be quietly running away and then shockingly it just turned and ran right at me, I just got back to the safety of my car as it cleared the fence.  I snapped a couple of photos before the critter turned and realized I would either not be an object of its affection nor a threat, so it left as fast as it came in. 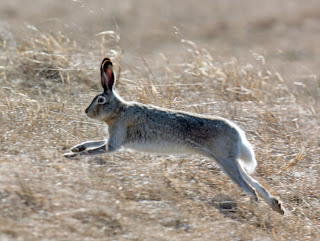 It is always odd seeing jackalopes run, they run just like a mule deer.  They hold their ear straight up to hide their antlers, although like I said, the doe shed theirs over winter.

Well I did also go birding, this wasn't about spotting the elusive jackalope.  I drove around to Bitter Lake south of Waubay and spotted a Hudsonian godwit, actually only the second one reported in South Dakota this spring, one was reported yesterday about 160 miles south. A Hudsonian is a good year bird and they can blow through here very quickly and I could have missed one.  In 2013, the only ones I saw were at my cabin in my front year and last year they hung on for a month.  Each year is different.

I jumped a flock of gray partridge a few miles away.  I looked for these over a month ago and never found any in Day/ Roberts counties and ended up getting one on the other side of the state.
I drove up to my cabin still looking for a yellow-headed blackbird and didn't find one but drove south and found three Franklin's gulls in a pasture across the road from thousands of lapland longspurs.  I needed the gull, a new

Now many of you may wonder why I ended up home and not in Arizona?  Well, I had a shoe problem, a really strange shoe problem.  I accidentally bought steel toed shoes and they were rubbing my toes oddly.  I needed to get my old shoes, I didn't want to hike up Ramsey Canyon and injure my feet for the spring push.  I also looked at the few birds I needed in Arizona that were there, and decided it wasn't worth it.  I walked off the plane in Minneapolis and stopped to send in one of my camera lens to get fixed at the camera shop and prepare for my next big push.  Silja had also made bananabread.  All in all, home was my best use of three days. 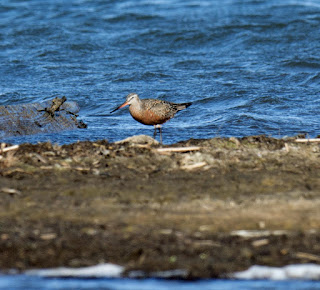 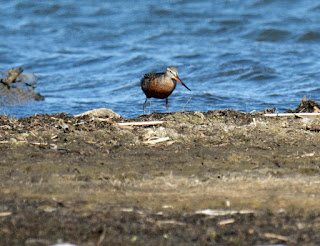 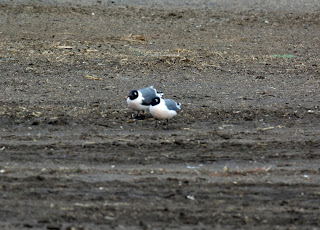 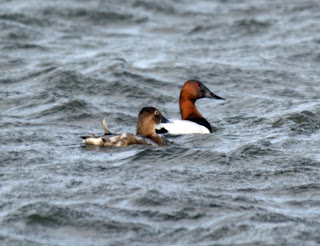 I've been noticing quite a few reports of the Montreal pink-footed goose no after I saw it, so that feels good that my sighting apparently got out the Quebec birders and to the scene of a code 4 bird.  I was sort of surprised that I was only the second person to see that bird at that location, but I was glad I did.  I'm still having pink PTSD.