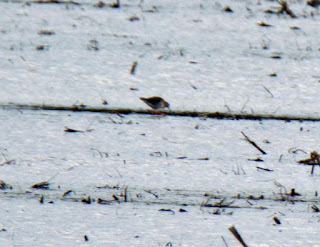 I was on a birding hiatus after I slunk back from my last multiple spot outing, I was tired, and had basically ran out of birds.  I took four days to rest, finish a novel (writing it), do some paperwork, sell a company, well a guy called me out of the blue and well...that is what I guess I do. My wife, Silja was starting to wonder when I was leaving.  Now not in a bad way but I haven't been home for 48 hours in over three months.  There were just no real birds.  A pink footed goose in Montreal, but it was all French to me.  The tufted flycatcher really wasn't reported.  I was starting to check on yellow-headed blackbird reports after Silja saw one and I didn't..chasing a yellow-headed blackbird...really?  There was this moving ruff report in Indiana, maybe that was something to do?.  Then my friend Theresa Schwinghammer saw it.  Finally, I just had to go so...I went...of course I had to drive through a blizzard in western Minnesota just to get to the airport....

This isn't the first time, I've birded in Indiana, I have a state list of 7 birds before I arrived with the mute swan, my only one in 2014, being seen in La Porte City, as my best bird, but I don't think I more than just bought gas in this state in my lifetime.  I have never spent the night here.

I landed at 4:15 pm, got into my rental car, drove 30 miles, found the flooded field with the ruff reports, no one had reported today.  Scanned it, sorted out a plethora of pectoral sandpipers and yes, tallied a lone female ruff by body size.  It looked 100% to be a ruff through the scope, orange legs, color pattern and head and bill shape.  It was tough to digiscope and then my old phone ran out of power, I snapped the above photo with my camera and you know, I think it isn't too bad, for what is a dot on the original.  This is my second ruff...yea...lifer 700 for me was a ruff in Minnesota and a that generated a much worse photo and view.

Ruffs are crazy birds with basically four sexes, if two isn't confusing for me enough and this is a good clean up bird for me as it was one of the 4 coded birds I missed by a day, this one in California.  Gotcha!

I later heard a field sparrow, the 4th bird of the brief trip. Each year I hear this bird singing and I am like shocked.  "What in God's green earth is that bird?"  Then I give up, clueless.  Then each time I get into the car and say, "oh crap, that is a field sparrow."  This year I smacked my head, last year, I kinked a rock.   I play the song and eureka, it all comes back to me.  I have a nesting pair a mile from my house in South Dakota so you'd think I'd recall this very odd song, nothing sounds like one.  Each spring for the last many decades the whole scenario repeats itself, but alas in 2016...field sparrow off the board.

Okay, I wrote to someone that I think I fell off the turnip truck here in Oakland City.  The city with the motto that it is "small enough to be a family..yet big enough to be a city."  They have an "old" Oakland City lake and a brand "new" one  "new" Oakland City Lake.  I guess getting a new lake is really keen!

These people here were good old God fearing country folk.  I drove by the Pentecostal Church as they were changing the sign.  "Jesus is coming!"  and "Justice is coming."  Amen brothers, I agree.  I wanted to stop and ask when David Justice was coming, I kind of like him when he played for the Braves, except in the 91 World Series with the Twins and it may be fun to hear him speak.  Maybe I should have?

After an entire search of the town, I found the one and only motel, the Diplomat.  I was about to start grumbling in the car thinking how could a college town not have a hotel?  Then I saw it.  The woman was locking up when I drove in,  "The rooms out back are half price."  She said as Sandy Patti sang in the background.  Her TV was portraying the healing hour or something with Benny Hinn, okay it is Healing Ministries. I heard him say, "The Prophets all prospered as they had no debt."  Did they even have banks back then?

In all the distractions, I forgot to sign my credit card and the woman chased me down outside.  I don't know, maybe I should have paid cash here?  Benny Hinn would not be pleased with me.

At first I kind of wondered what went on "out back" and then I got the to the room, flea bag special. 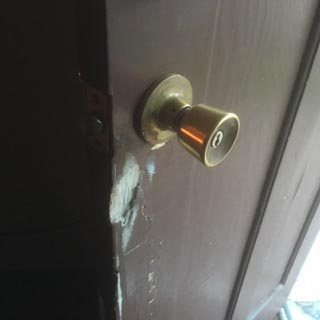 I sometimes wonder if these rooms could only talk.  Why was someone prying open the door?
I noticed the sign out front stated they were freshly remodeled.  Hum...I wonder what they looked like before.

I wanted to eat at a place called Fish House Pizza, just because.  They however closed at 8pm, and I got confused as to what exactly time zone I was in.  The line goes through town.  I ate at a restaurant called Grandy's (the only one left open) and it would have made Gordon Ramsey explode, and then he would have died...just died.  I have seen restaurants with the owners dog sleeping under the tables that were cleaner, in fact, this was by far the dirtiest eating establishment I have ever been to.  The floor had sand, chunks of burger, fries, a piece of a chicken, and the tables looked as though they had never been wiped this week.  I could see in the kitchen, OMG...that is all I can say.  I could see two healthcode violations and I don't even know the code.  I would have left but...

They were having a prayer group, I arrived when they were laying on of hands on a woman eating chicken.  Did I need that if I just had catfish?  Yea, I'll stick with the catfish as I looked at the chicken on the floor.

Oakland City College now University is here, which is a General Baptist school, now I attended a General Baptist church in a couple of location during my more evangelical period.  This is like a home base for them.  I used to say of the General Baptists is that we used to go to church on Wednesday and discuss and wonder what the Pentecostals were doing....generally instead of doing much ourselves.   But man could they pray.  Maybe they will come over when Mr Justice comes. he might entertain them too.  IDK.  When IS Justice coming?  I should have asked.  He would be good for them, too.  Then a biker gang pulled up, all in their colors, it was time to finish up.  The Road Riders Christian bike gang came in for their late night meeting or prayer, or something.

This college here is a bit like Lazarus though, hanging on by mere yarn a couple of times in its 130 year history.  Besides the pastor I had in Ripon, WI, a notable alumnus, well the only notable alumnus I can find to keep up the baseball tradition is Gil Hodges from the Dodger glory years back 60 years ago.

Well, enough fun, another coded bird, another state, another priceless memory of good ole' Oakland City....Indiana......because well, it is a city and it has city in its name!