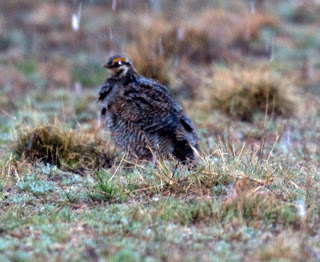 I know many of you hate everything that is Trump, was Trump, could be Trump or remotely associated with Trump or maybe America is becoming great again...I don't know.   One thing that many hate is his ownership of the Miss America Pageant.  Many say how could any feminist, or feminist friendly person support such an endeavor as a beauty pageant or for that matter any sane person? That is your right to think that.  This is not a political puff piece, just an observer in Rural America reporting on what he sees.

With that disclaimer, yesterday I drove into Laverne Oklahoma, up at the corner of the Panhandle, an area I've spent a little time.in.  Places settled back just before Oklahoma became a state, generally named after someone on the railroad or a local rancher.  The sign on the edge of Laverne says "home of Jane Jayroe!"  Main street is named "Jane Jayroe Ave,"  So I ask, who is "Who is Jane Jayroe?"
I ask Silja again and then I see the arch over the highway.. 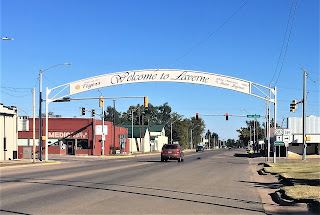 Jane Jayroe, Laverne's number one citizen, of all time, a woman who obviously came from nowhere, as Laverne is classic rural America.... became the 1967 Miss America....Who'd have thought about it.  In Laverne, I could have got more traction in talking about the Jesus being a terrible person than telling them what the LA Times wrote in 2015

"For girls, the relentless pressure to conform to societal notions of beauty abides a more pernicious evil: the push to indulge males' pervasive objectification of females' bodies."

There are more nastier  opinions about the ills of beauty pageants.  In Oklahoma, Jane Jayroe is the town hero, even the state hero still 51 years later.

So what did she do with her fame and after her year of being "Queen"?

She became a popular TV anchor in Oklahoma and Dallas.  She served as the Oklahoma secretary of Tourism and Recreation,  She had and fought breast cancer, wrote a book on surviving it, also wrote Chicken Soup for the Mother's Soul  as well as other books on religious themes.  Served on boards of breast cancer research at the Univ of Oklahoma, Oklahoma Commision on the Status of Women, and raised a son.  She has been active in her church and other civic projects. She is trying to make everyone's life better.

In other words, she just wasn't some stereotypical bimbo pretty faced beauty queen, she was a credit to the human race.  He life should be a credit to all, not just the citizens of laverne. You learn something new everyday.  GOOD FOR HER!

Would she have done what she did without Miss America?  Maybe?  Maybe not?

A few miles west, before I drove into Oklahoma, I drove through Canadian, Texas.  Where we we experienced an earthquake.  The RV just about got shook off the road.  "What was that?"  I  asked.  Later I saw the report of a 4.0 earthquake nearby.

We stopped to read the local history of this town which had a much different history than Laverne. Canadian has a very rough and tumble past.

It was a town where prior to 1900 contained no churches, it was said the only citizens are saloon keepers, railroad men, gamblers, lawbreakers, and prostitutes.  The women here are honest as they charge you by the hour.  A popular sheriff once got shot and a forged Governor's pardon led to a jail escape, and for decades it was said that it was a place where someone could get away with murder.   There were lots of murders, everyone got away with it unless the Rangers were in town and then sometimes...you still did as the saloons had secret escape tunnels.  It was a center of rum running and illegal hooch production, and there was even a fraudulent contract to build the county courthouse.

Then there was a rather curious contract that the Santa Fe Railroad had with its workers that guaranteed prairie chicken dinner every night but a local supervisor complained that he couldn't keep men at the job because they were just "sick of the damn birds" and advised the President of the railroad that they could only stomach it twice a week at most.

Corporate sent money to purchase local beef in a move that probably saving the Lesser prairie chicken from extinction....  I bet few birders know of that history.  How a chicken was saved by some cows.

Which leads me to a Lesser Prairie Chicken story of my own....it has become a story of legend

It was back in 2012.  We had some business dealings in Purcell OK, south of the capitol.  I brought with two of my executives.  Afterwards I made arrangements to go up to Selman OK to stake out the rare chickens in a couple of blinds, not far from Laverne. My two travel companions were not birders, but guys looking for some adventure  and Woodward OK was on the way and we were starving.  They just had a tornado hit part of town and so much of the the town was closed but we saw this local joint open.

We walked in.  The place was where Hee Haw met the Cracker Barrel.  There salad bar was an old rusty Model A Ford with the hood cut away and plywood paced with bowls of greens on it.  The guy next to the one open booth was missing two fingers and looked like he had just came up from the Canadian River "noodling" catching mudcats using only fingers and hands.  A sport illegal in almost every state except Oklahoma.

It WAS rural America.

The waitress came on over, dressed a little like Daisy Duke.  "Hi ya huns!"
"Our special is....deep fried catfish, served with hush puppies, deep fried wagon wheels, and deep fried okra....how about that?  I'll be back in a sec."

"Can you get Mevacor on the side?"  One of my friends said snidely (a lipid lowering drug) but she never heard him as she went and grabbed a bill to give to the two guys on the other side of us.  On the tray with the bill were mints with Oklahoma and Oklahoma State college football insignias on them.

Now my other travel companion is an unabashed Nebraska fan.  Lives for the red and white.  Still pines for the old days of the Big 8.  Hates Texas, as he thinks they drove Nebraska into the Big 10, and so the Sooners are still his hated rival.

He speaks up.  "I'll take the special as long as it doesn't come with any of those dang mints..."

The waitress makes a face, slams down her order book.and screams, "you can insult my honor, you can complain about my food, but when you insult my state, you have good to far, now get the hell out of my restaurant!"

the three of us paused not knowing what to say, then a state trooper sitting opposite stood up, put on his hat, and unsnapped the leather strap off of his pistol.  "You heard the woman!" He said sternly.

We started to gather our things.  The officer had that look that he was implying "Kansas is only twenty miles up the road, I suggest you head that way."  I'm not sure he actually said that or not, we were walking fast on old wooden floors, and maybe I just was thinking what he meant.

In the car my Mevacor comment friend asked where we were going to eat now, I threw him a bag of trail mix.  We left town and drove to the ranch hungry.  We were lucky we weren't taken out and beaten.

Today we drove past the best sign from that trip...it was still there welcoming us to safety as it was in 2012 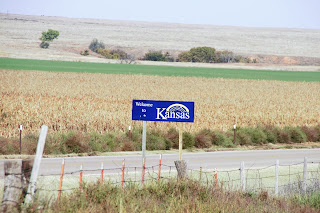 Lesser Prairie chicken stories....Oklahoma Panhandle stories, and life from RVing on the road..glamping in style or as they say 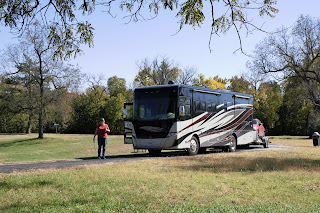