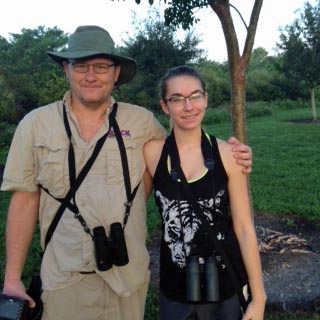 I flew into Ft Lauderdale on New Year's Eve and met up with my daughter and wife.  We celebrated the New Years at a local Italian Restaurant and then drank a bottle of Moet champagne back at the Ramada Inn in Newfoundland time, we were tired and it was a long day traveling.  Besides...I had a big year to start early in the morning.

Don't let the Bird count total fool you.  Although that number is important.  Eventually I will run out of easy birds and it is actually the coded bird number that is important.  These are rare birds coded 3-5, with five being the rarest birds rarely seen in the USA.  I can explain that later.  I have to say that that number needs to get around 80 for me to have a chance at any record and over 60 for this to be considered much of a year.

We were at Crispy Creme before 0630 and my wife and the woman at the drivethru had a misunderstanding about tea.  "We have sweet tea, dear."  Became the frequent southern answer to my poor wife asking for tea.  We drove into Bark'm at Markham Dog Park just before 7am and we went to work searching, I went right and the ladies went left and then after some distraction I saw Lena looking at something it was 7:07, it wasn't even dawn yet and she had the rare bird 6 feet away.  Brid #1.  Western Spindalis.  Code 3.  It was very photogenic.  It just sat there like it wasn't even there. 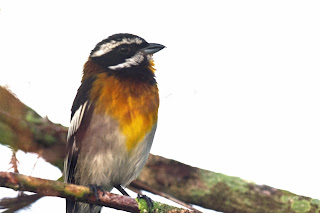 Ten minutes of snapshots later it flew off and then we went and looked around finding a few birds, my wife found a bathroom for her tea and when we were walking back from the pond, I spotted the flock of spot-breasted orioles with the spindalis in tow and off they all went into the trees. 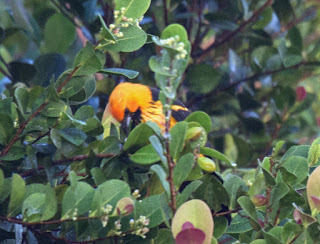 We met a birder just showing up at 8 when we were moving to other spots and it turned out she waited 5 hours for the flock of orioles to swing back through this part of the park.  My advice is to walk the dog early to see this bird if you are going to Markham.

Well primary and secondary birds seen, it was time to run up the score before the plane left at 6pm.  We went off to Loxahatchee NWR and saw limpkins and other birds, nothing really special. 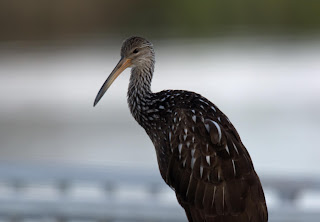 The we went off to Snook Islands Wildlife area in Lake Worth and I run into the first birder who recognized me, "Are you Olaf the nude birder?"  She asked me I had run into her on the exact same spot 15 months ago.   We chatted about her spot, the loss of Mangroves as sanctioned by the local government and the birdlife.  She gave a tip on the Nanday parakeet flock.  We drove across the bridge and found them in a tree.  Nanday parakeets 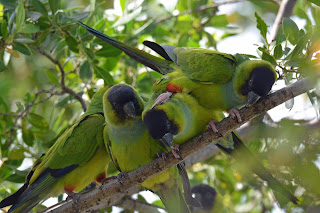 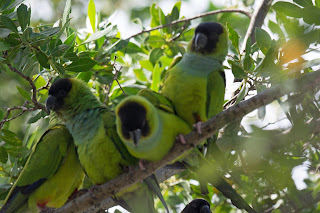 I got head shots of least bitterns 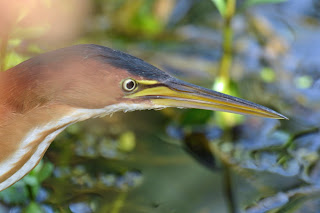 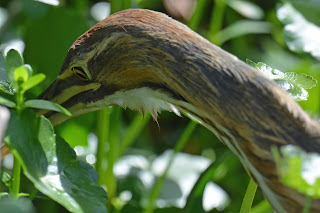 All birds that are tough to see, but in my case they were too close..weird.

We wrapped up the overtime at 3pm and headed for the airport, 74 birds on the board and feeling good.  We had almost three hours at the airport and then IT happened.  First, my daughters can of salt caused suspicion with the TSA.  I waited for them to finish and my laptop still out was put down on the chair I was sitting next next to...then they got through and we went to the gate.  I went to plug in my computer and sh$&t!  It was gone.  I'd left it back next TSA.  I got back and the TSA guys said someone took it, it wasn't their problem.  I couldn't find anyone.  I found a skycap who told me to go out to United Baggage.  I went out there and they said it would be lost and found.

Lost and Found it turned out had a sign.  "We will be open sometime next week.  Happy New Year!"
I went back to baggage.  Eventually, someone at the sheriff's office remembered hearing of a computer.  I found out it was taken by a United employee.  Whew!
Problem was, he was at break, nobody knew where he was.  I sat down dejectedly,  three unfinished novels were on it, one with no backup whatsoever and the other two two edits earlier.  I was devastated.  The woman at the desk got tired of looking at me, head in hands, she made some calls.  It turned out the employee eats lunch with the baggage supervisor and he brought it back to the old guy sitting akimbo between two unclaimed pieces of luggage. I was going to give her a $50 tip but the handover happened so fast everyone was gone, but I had the laptop!

I went back through security and was selected for the extra special treatment.  I was ready to bend over when they let me pass.  I NEEDED A REALLY BIG BEER.  Then I realized I had no battery power when we boarded the plane and for the worst flight in sometime, I had nothing to do.  We were late to Houston and we boarded early, it was rough, really rough and it seemed like it was one of those flights that just wouldn't ever end.  You know the type, and no plug ins in the better seats for powerless me.  We have just enough time to run across the Houston Airport to catch the flight to McAllen TX but by 1120, we were in our motel in San Benito and sleeping for day #2.

I have to apologize for this blog as I was pretty much out of my mind and I couldn't write it when I usually do on the plane to next destination.

Florida I trip total 74 birds!  It was a start and I was dog gone lucky! to get my computer back, and I not talking about the spindalis for that...thank you Lena!  Her rarest bird to date.