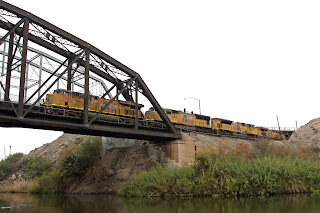 
I left San Antonio a little unsteady.  Allwin had put $8500 in damage in my car hitting a deer.  I had lost my field guide somewhere, either deep into the bowels of my car, although I don’t think so.  It was most likely left at a hotel.  I was also feeling that I was birding so fast I was losing the bigger picture.  Many of these birds I will never see again and this may be some of my last time spent with my daughter.  I needed to savory it and savor the moment.
I was on a flight with army recruits going somewhere for basic training.  Some where excited, most were apprehensive on what they had gotten themselves into.  They were braver than I was as I would never have enlisted.  I don’t know.  In my mind, being in the military used to be a noble thing but the way we’ve chewed up so many young men in needless and endless engagement I am uncertain.
My own young woman who had came with me impressed me as a birder.  Lena was fun, witty, and sharp eyed and eared in the field.  I needed her and I am glad she came with and is coming with more….more Lena more often, I say.  To be frank, I wore my wife out.
I feel apprehensive every time I fly into Phoenix.  It is from my zoo adventure in 1988 when I accidentally wondered into the oryx exhibit in the zoo when I got lost in the desert.  I was thrown out and permanently banned from the place.  I was reminded about that when we stumbled upon some exotic game animals on Martinena Road near Encinal, Texas.  I wasn’t sure what we saw.  They were bigger than impala but looked a bit like them.  Lena was impressed. That, however is something for another time.


The weather announced as we descended, fifty five and rain in the Phoenix area…oh swell, more of the same.  I will be birding alone on the 5th, but then like old guest star week, I have old pals coming to help me.

You got to love the thrasher spot but BEWARE!  the eggs farms are moving in and since I was last here in 12/ 2014, they have moved within a half mile of the prime spot.  Maybe the thrashers will move west, I don't know.  So come soon or miss out.

I hit a triple here at day break.  Three thrashers.
Thrashers are odd birds.  They look funny.  The skulk around.  You call the LeConte's and a Crissal pops out.  You call a Crissal and a Bendire's pops up, in general, the LeConte's never pop up, they just run like a crazed roadrunner on meth.  I found one in such a mood on the south of Salome Road, which I think is the better side, less bed frames and garbage, too.  No burnt furniture...well this is Arizona desert, there is burnt furniture everywhere, but less.
I tried my best Elmer Fudd imitation as I scurried from bush to bush (salt bushes?), trying to get the LeConte's in my camera, but as it ran with it's tail up high, I eventually got distracted by a sagebrush sparrow, which, I may add are about as challenging as the thrasher, this is a lucky shot almost shot on my hip. 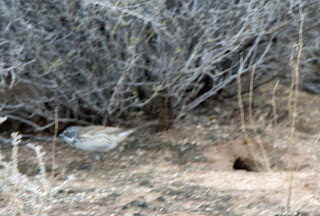 It sucks but it is identifiable.  I finally wiped out and lost track of the thrasher and the sparrows.

The other two thrashers sat up nice, Bendire's thrasher 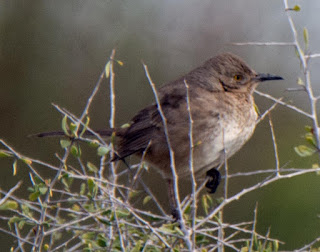 Crissal Thrasher, they look like the LeConte's but do not have black in the lores, the space between the eyes and the bill. 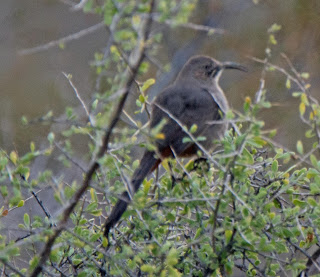 One has to be careful seeing black lores with an orange butt because the Abert's towhee also meet that description but have a sparrow type bill.  They are smaller, too.  I know it is an Abert's towhee as I can catch up to them and eventually they will fly.  This is a blurry photo of one that stopped. 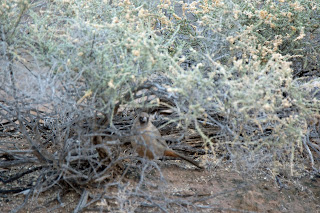 I also bagged the black-tailed gnatcatcher in the thrasher spot.  I like trying to photograph gnatcatchers 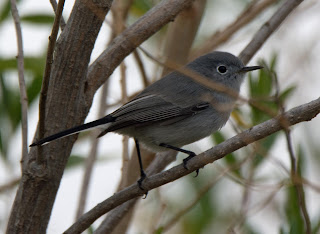 3 new birds and all I needed in the bag, I headed like a maniac to Yuma.

They had been reporting a streak-backed oriole here for over a week and maybe over a month as there is some thought of a missed ID of this bird earlier.  This is a very small park and right off I-8, but this was the 2nd easiest bird chase, I have ever had.  I could hear it chattering before I even got my seat belt off and I had it in my bins before the car was even out of drive.  Score one for me, my luck is back!!!  This more typical my kind of luck, I am the luckiest birder, ever. 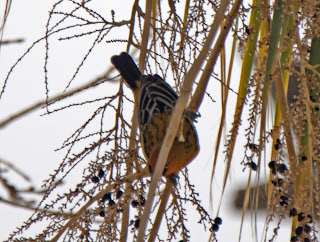 a good look at it's back 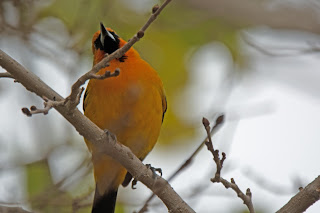 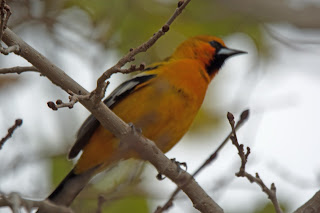 I've shot better photographs in my life but heck, this is a code 4 bird!!  The lighting stunk and well, my better lens is still in San Antonio drying out.  Lifer #717 though...bird #180 for the year!

I took a moment to enjoy and savor the moment, I may never be back here.  The park is at the old Prison Cemetery....we should have more parks in cemeteries! 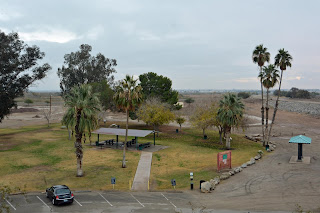 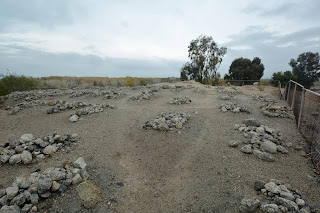 The bird is actually in the second tree from the right, BTW.  Those are graves.  The oriole is feeding on berries but I have never seen such a fore lorn tree, that oriole better find a new tree.

I took time out to enjoy the Colorado River, it is actually quite peaceful here and to my surprise at 3:10, who was clicking and even once called none other than a Ridgeway's Rail. I have seen them many times in Imperial Beach when they are flooded out at high tide but heck, I can go do something else in San Diego.

I enjoyed the serenity of a black phoebe 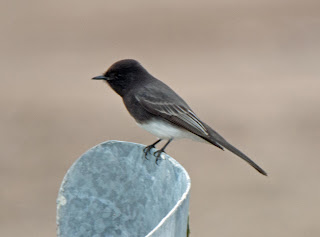 I was watching a Anna's Hummingbird male 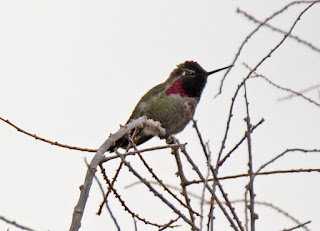 It was nice and then a pit bull terrier found me, and well he just licked me...silly mutt.  Then he barked and wanted to play.  Birding was over.

I drove east to Tucson, and was going to work the desert for sparrows but found this scary sign. 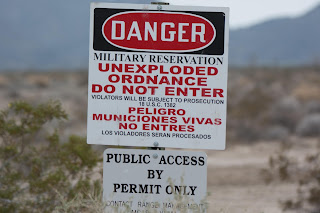 This is right across from a development, but I didn't want to be what next went boom in the night, so I heeded the warning and drove on and then where there weren't signs, I found BLM land where everyone now camps for free, it is so odd to just find groups of campers out in the middle of nowhere and I don't know what to think about it but maybe that is how all the garbage gets out here.  I couldn't bird here either. 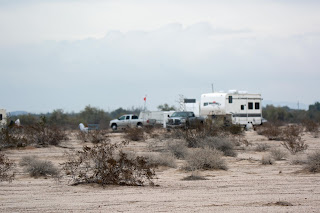 I drove east at a break neck speed and tried to find a mountain plover in the Santa Cruz Flats north of Tucson but it was raining and getting dark so that wrapped up a rather long but productive day.

It was only day 5 and already I have been helped in person by two people, one I've never met, I showed a man his 500th life bird (zone-tailed hawk), I've had one odd Ebird rarity argument over a flock of Sandhill cranes of all things, near a dairy farm north of Gila Bend.  They were everywhere....I have had one person scold me for my birding ethics and not like how I wrote something, had three unfriendly incidents with birders in the field being rude, so I have sandbagged one ebird post as a result.  Hey, don't push me in the mud to get a bird!!  I have uncovered one probable wrong ID of a post I chased....but I wasn't there and it could have been seen.  IDK, I have also had a very nice comment by a big time big year birder in the past and been dissed by another big time birder on a facebook friend request, oh well.  I was also dissed by an optics company but that is for another post.  Let me just say, my wife's binoculars, her Zeiss pair would make a very good one if you are in the market.

You know, I'm just the little train who thinks he can, like the 3:10 to Yuma.  I'm in the desert now but I'm a coming down the tracks.  In fact, I was even the medical officer on a train cruising around trying to see if people ignored the flashers in Wisconsin on day, and I didn't get to drive but I ran the air horn. It was the same engine as is leading the set crossing the Yuma bridge.  Small world.  I like trains, and used to photograph and chase them more than birds.

I promised an explaination, 3 is for three thrashers today and 10th FOY bird --a code four, the streak-backed oriole.

189 birds, three states and you know, I can go at this pace all year, the key of being an ER doctor, this is how we live.  12 on 12 off.  Cleaning up Tucson tomorrow and the 7th, with the king of Green Valley.  Will report more on the end of that project.  I will be netting some serious numbers in the next two days if the rain stays away.

Anybody need something to do?  You can come and hang with the me, but bring your snake boots and some energy because we got one speed and that is GO!  Send me your free time and I can work you in.  BYOB, beer and bins

Olaf
at large in Arizona,