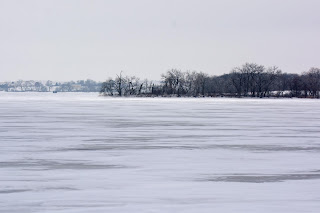 I woke up at 8am to the hug of my daughter and walked out the front door to see her off to school.  I looked at my feeder and tallied a year bird. 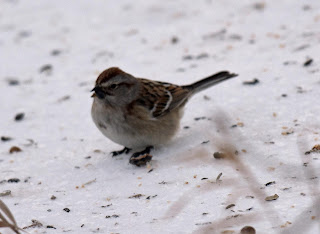 Then my pheasant rooster crowed and ran away in the distance 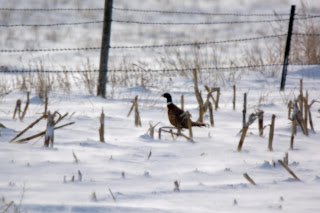 I hadn't even had coffee yet and I had tallied two birds.  It took me 363 birds to see a ring-necked pheasant the state bird of South Dakota, who would guess?
Besides that 5 minute flurry, I took the day off from birding.  I cashed a few checks, made a few phone calls, and paid a couple of bills.  I also got my glasses adjusted that I slept on in the California Mountains.

I awoke at 0410, 5 minutes before my alarm.  I have always had the uncanny ability to awake a minute before my alarm no matter what time I would set but if I had nothing to do, I could sleep until 10am without a problem.
I headed west to meet a birder buddy I knew, Birding Barry, who knows his way around Aberdeen and had a lead on some key birds.  Barry had texted me that one of his friends had researched the history of big years and as far as he could tell, none of them had ever birded in South Dakota, well all I can say is that, if it is correct,it is no longer true.  I had tallied two South Dakota birds already and was shooting for more.
Most people who look at a map of South Dakota and who don't confuse it with North Dakota (note: the two Dakotas are NOT the same!) don't appreciate the huge terminal moraine the extends from extreme SE North Dakota and runs at an angle through NE South Dakota and into Minnesota.  Generally, the weather on the east side of the Missouri River in the two Dakotas are similar with it being colder in Minot and a little warmer the more south you get.  The exception is the top of this 40 mile moraine.
In general, it is windier, wetter, snowier, and colder than the land on either side of it.  My cabin sits right in the middle on Enemy Swim Lake.  The crest of the old Milwaukee Road line as it chugs up the grade is a small town called Summit and through a bit of location, winds, etc. as the air is compressed, it forms fog, and Summit is the harshest part of the land.
This morning as I left the moonlit city of Milbank and climbed, I was first greeted with dense fog and then, a harsh wind, and then as I slowed and crossed the road closed gates crossing I-29, I was greeted with blowing and drifting snow.  I expected no less in my Bad Weather Big Year.
I-29 is an odd interstate.  For decades, it ended at Summit and then people used to have to switch to US81 to continue to Fargo beofore continuing on I-29 to the Canadian border.  The road was then extended to Sisseton and finally to Fargo.  However, the planner of the freeway just drew a line to fargo and it doesn't follow any old highways and as such, except for a new casino at the border, it is a lonely and desolate road.  To make matters worse, the engineers forgot about where this road is and didn't elevate it correctly.  As such, any snowfall in the wind makes it accumulate on this road and this stretch is frequently closed and I have driven on that road by feel alone, as once you leave Fargo, there is really no where to go until you get to the casino.  I have also almost ran out of gas on that 60 mile stretch.  Just south of Sisseton when you climb the ridge, I have hit glare ice, four foot drifts, and fog so dense you couldn't see anything.
The truckstop at Summit has hosted NCAA Division I basketball teams, famous bands, politicians, and assorted tourists and ner-do-wells during some of the worst the Coteau can offer. Today was just an irritant.
I met Barry in Aberdeem and we headed out to find Screech owls.  We first went to Richmond Lake State Park and began our search before dawn.  We heard nothing.  We started walking the trails and then what looked like a small owl flew right in front of us.  Barry shined my light into the tree I thought it landed in.  It wasn't there.  It was nowhere.  It was definately a small owl, and saw-whets are very rare here, so it had to be right?  Then we hiked about in the quarter then 3/4 light and then flushed a sharp-shinned hawk near where we had seen the "owl."  I guess it could have been a sharpie, but doubt it,  Since I couldn't be sure what we had seen and it never called, it counted as a UFO....pooh!
We drove around to Barry's lock Snowy Owl sights, unfortunately nobody brought the key, no owls were seen, except a great horned at Mina State park.
We saw some other birds at Mina.
Unfortunately, my daughter had turned off my Vibration Control on my lens, we flushed a Northern Goshawk, and then it perched in a tree.  I shot a photo, it was blurry...oh well, at least it wasn't a rare bird.  We also saw redpolls at the feeder. 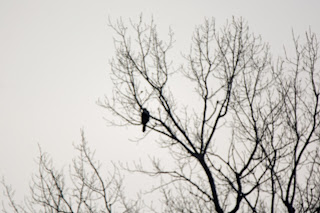 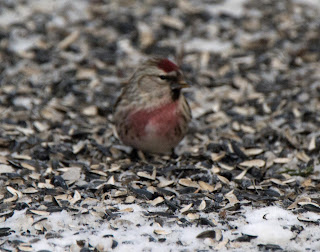 Then we headed back to Richmond lake SP looking for Pine Grosbeak.  We also looked for the huge flock of waxwings which had 3 Bohemians imbedded in it, they were on private property raiding a cedar tree.  The cedars had a bumper crop of berries this year and the waxwings were stripping them in bunches.  I scoured the 200 or so birds for anything without yellow at 70 yards.  I found two Bohemians.

#300 now with a picture  American Goldfinch 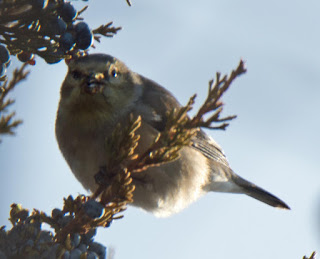 The goldfinch were also eating the berries.  A common bird but a year bird none-the-less.  We never spotted the grosbeaks.  We looked for the owls some more

The bird police caught me and noticed I saw the bird at #300, which explains why my ebird total was one off from my checklist counting.  All fixed.....I can't even count to 365 it seems

Enemy Swim Lake
I drove to check on my cabin on Enemy Swim lake between Milbank and Aberdeen.  We built it in 2002 just before we moved from Wisconsin to South Dakota in 2003.  The cabin is extremely isolated out in the Coteau and we leave the heat on but if the snow and wind gets too bad the truck can't deliver propane, and if it runs out...the plumbing bills get expensive.  You would go insane living the winter here although technically you could.
It is a wonderful lake in the summer.  Some winters I can't get in within 1/2 to 3/4 of a mile. This winter I could get to within 300 yards.  I parked the Volvo on top of a hill and walked in, spooking large white snowshoe hare who got so scared I could still see him or her at a sprint going up the hill a quarter mile north of the cabin. The cabin's furnace was on and no one, animal or human had moved in 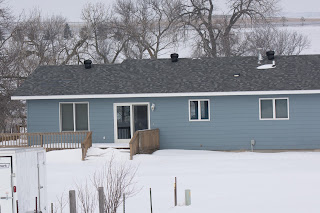 Just outside of the cabin I wandered into flocks of snow bunting and lapland longspurs, thousands upon thousands of them lifted off the side of the road. 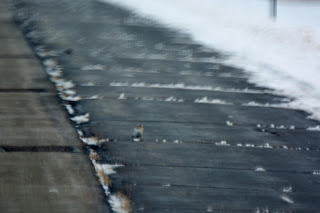 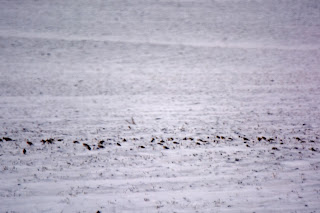 I drove home and did the father thing, I filled up my daughter's car with gas.  I bought groceries, a couple bottles of wine, and some cheese for me.  Life in the Northern Prairies, where we don't panic about any blizzards like those in the east.
Many call this hell, I just call this home.....

I got a report of a flamingo in Florida, the pink devil, a nemesis bird.  I fly out in the morning.  I'm leaving my paradise for the warmth of south Florida.  I hopefully will be seeing pink when I arrive
Now someone doing a major big year has birded in the real Sunshine State, the traditional and official name for South Dakota