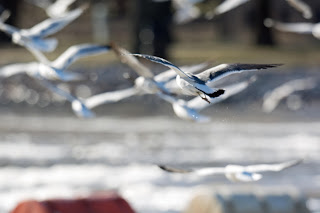 The reports were going out that a tremendous gullnado was forming in SW Illinois.  Many people were running to take cover, some had locked themselves up in storm shelters, and many were looking out there windows and scratching their balding heads.  At The Carlisle Dam, the US Army Corp of Engineers were making ready the spillway that would be the center of the storm, the eye of the gullnado so to speak.  An intrepid few, like Arvid and I, we were gullnado chasers, like the men and women from the University of Oklahoma and we had flown into St. Louis just to follow the reports and to see it ourselves.
We touched down at a little after seven and headed west towards the tempest, but in Missouri, my bad weather big year aside, it was totally clear and sunny, a tad under 40 but mind you I real honest to God, f4 gullnado was brewing just east of us, we knew it.  We stopped at McDonald’s in Trenton, IL to eat and with Arvid at the wheel, it was always a bit of an unpredictable situation itself.  Arvid swerves for birds, u-turns for hawks and stops short for every owl, well not always but enough for me to have to keep an eye on him.
I have always said, it is always best to arrive at a gullnado with a full stomach and lots of caffeine.  These things can have a life of their own and one shouldn’t starve as they can be frustratingly long.  Arvid drove through the payment window at McDonald’s, something I do now and again and did in Texas just yesterday, but this totally flustered the people and they didn’t know what to do with Arvid’s money.  Finally, after the line was backing up behind us, she just gave us free breakfast.  She made up an excuse.  It didn’t buy it, but I was thinking now, we will drive through all the payment windows and see what this gets us, sort of a research experiment.  I will report the results on later blogs.
It was some time after nine when we arrived at the spot, gullnado ground zero and we were not disappointed.  The vortex was already high and forming secondary circulations and occasionally as high as you could even see.  What exactly is a gullnade, you ask?
A gullnado is a swarm of gulls feeding or flying around from a fixed spot, like here in Lake Carlisle, the spillway, occasionally one would form out in the lake as they prepared to come in to feed or when an eagle flew by.  The spillway was open due to the floods and minnows and other feed were plenty in the waters.  The gulls were to steal a term from somewhere, in a feeding orgy of sorts.
How many gulls?  Maybe 20,000 ring-billed gulls, one lesser black-backed gull, a few Bonepart’s gulls, a smattering of herring gulls, and the code four, black-tailed gull—the goal of our chase to Illinois.  The Bonepart’s and the Lesser black backed were two year birds for the big year.  Everyone was happy, who we met as they had all just seen the rare Japanese gull feed and well they said, it flew over there.  It was maybe, a quarter mile away and you could see some of the markings but well, here is a photo and you can decide. The V points to the gull. 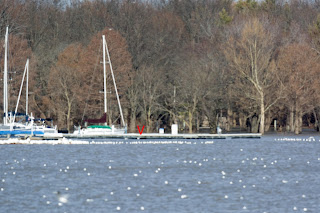 Do any of the mantles of the gulls look dark to you?

We waited and we froze.  It was cold up there on that dam, a damn cold place, I may add.  Year birds did trickle by.  Here is a flock of greater white fronted geese. 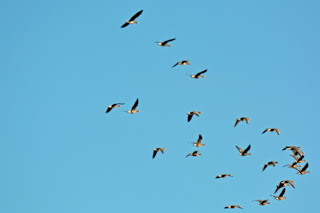 I spotted my canvasback, well a large flotilla of them.  We also got snow and cackling geese.  Six lifers and not a really decent look at the rarity.  I hiked the damn, I skuaed the birders, everything but nothing happened.  Occasionally, you’d see an immature ring-billed that had a banded tail and you hoped but alas, it was just a ring-billed. 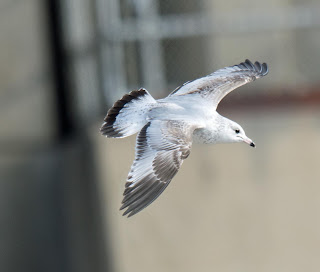 You’d try to sort swimming gulls and then, frustrated, you’d start over again.
Finally, as if God intervened, out of nowhere, a shout from down on the spillway was heard and we turned around to look and then I spotted it.  People ran off the damn like it was going to burst, the f4 gullnado had happened!

It was feeding in the gullnado and I had an excellent look.  Arivd, though, couldn’t see anything.  He was unable to see the gull through the hoard of other gulls circulating.  I ran down to the right side for my camera, why didn’t I have my camera you ask? 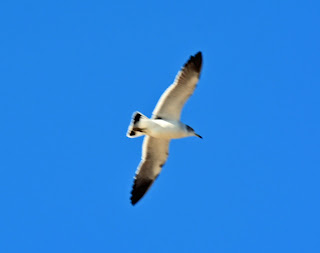 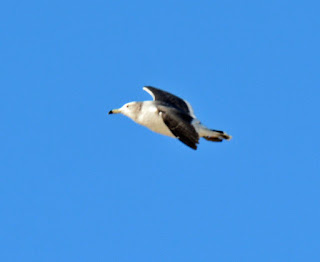 Longer bill, longer wings, and a white space below black on tail. 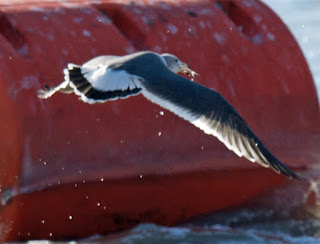 As in football, we were now in bonus time.
I had one St. Louis area bird I had to see.  The Eurasian tree sparrow, an exotic brought over by presumably German brewers to St. Louis in the later 1800s so that they had local birds too just like the English had their sparrow.  Initially the German sparrow it has spread slowly up the rivers around the central Midwest.  My lock spot for these is in Cedar Rapids, Iowa but if I didn’t have to go to Cedar Rapids, and could see one here, it would save me time.  I don’t expect a rare bird chase to eastern Iowa but in writing this, possibly, a gullnado is forming as a type.
Having lived in St. Louis for four years, I left Arvid in charge.  This was my second time to St. Louis and appropriately we were heading near Cahokia, the site of the largest man-made pyramid in North America, made by…?  Maybe Native Americans, who knows.  This huge city is one of those megalithic sites that you can’t describe and worse, no one has ever heard of.  That previous trip to research the pyramid involved me sneaking in my Springer spaniel into a hotel room and the family watching a new movie called Legally Blonde.  I remember it making Grandmother Lucille laugh as she went with on that adventure.
Arivd took us to Horseshow lake State park in E. St Louis, and …we dipped out, but the referee hadn’t blown the whistle for extra time just yet and like that last second corner kick, we went around a corner and some flushed on the side of the road.  Jim swerved for the shoulder and we hopped out and got them,  year bird, #314. 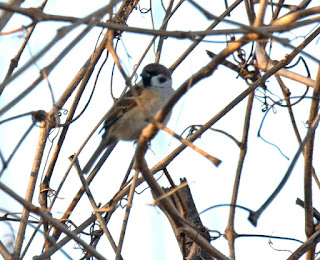 Sorry the city of four seasons or in my mind, the city of four smells, Cedar Rapids, you’d have to be skipped.
Things were going good, the Opening Gambit, that foolhardy plan had yielded 314, I was now only 26 under Komito’s January record of 340.  It was only the 13th and I’d pass him now on the 15th when I started to bird California for the first time and I could get 400 if I decided to chase to Alaska by the end of the month.  Besides that, I had 16 coded birds and I had seen a new one each day for 13 consecutive days, that had eclipsed my personal record of 7 in September 2014 on St Paul.  It was brutal but I wanted to put up a big number to spook people thinking about doing this out of the game and I was still not sure of what Greg Miller, one of the other 1998 Big Year birders was actually up to.  He was doing something with tag alongs or maybe that was just a way to make a few bucks to cover the costs of a big year, IDK.  Greg Miller was real and he wouldn't just be scared off, but was 750 his overall plan?

I had tried to friend him on Facebook for added intel, but alas, Olaf Danielson is not apparently friend material for a real birder like him.  That is okay, I understand, I was going to creep on his sight anyhow.  But not knowing wasn't a good thing for me, and so I deduced I needed to really put the hammer down and maybe I’d chase to Alaska before the end of the month.  I needed to go up there in winter anyways.  I’d have time to work on that as I wasn’t even sure how I was going to get back to my car.  I may have a couple of chases just to get there.  I had so many open ended plane flights, I have already been on two flights at the same time from adjoining gates.  Where even was my car?

We got back to the airport and jumped a plane heading west to Phoenix and then we’d drive to get a couple of fresh rare bird reports on our way to the west coast.  By flying to St Louis, and leaving my car in Austin, I had actually given myself a couple extra days of birding, although that is birder math and we only know how to count to 750, so when I mentioned this to my wife, she just didn’t want to talk about it.
“Silja, the car is in the airport Hilton in Austin and in my wallet is a claim check for two bicycles in there storage area.”  I dutifully reported.  I have some explaining to do when we met up in California by the end of the week.
“Beware of the gullnado!”  I warned her in jest.  She told me just to call her back later.  A gullnado was beyond what she could comprehend as was a bird chaser husband who had already been in six chases in 13 days and when I said I was going to Illinois she said,."To where?"  Sigh, it is going to be a long year..