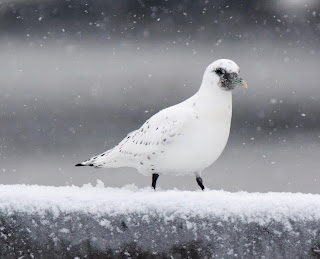 I was getting serious grief from my Twin Ports Birding friends that quite possibly I was the only person on earth  that hadn't seen the Canal Park Ivory Gull, so I altered my plans and flew all night for Minneapolis.  I picked up my rental car at 0600 and made tracks for Duluth, MN.  Again after 5 of the last seven days of heavy rain and iffy weather for another of the days, I had high hopes for this mad dash but alas it started to snow.  I have decided to not name my Big Year after outhouses, I will rename it, the Bad Weather Big Year.  Maybe if I call it out, the weather will improve.

60 miles north of Minneapolis the interstate was snow packed and heavy snow was occurring, almost blinding in the predawn gloom but heck, this is MY turf, big deal, I drove hard anyways for Duluth.  I had rented the correct car and only for $10?  I have always had a love-hate relationship with Duluth, hated it when we lived there twice and miss it dearly when we were gone.  In fact, I lived a block across the ship canal back in 1989-90, when I was in medical school, from where the ivory gull had been reported, so this bird really was on my home turf.  I listened to the radio, KDAL 610 and they were giving bird reports and it was the top news story of the morning for the tourism impact to the town.  Let it be known, I spent nothing in Duluth on this visit, in my mind, I already gave.  Would it be there?

I arrived to the Canal Park parking lot, a place I used to photograph ships and there it was, posing for 3 birders, the other gulls were a hundred yards away and this one, ten, my fastest chase yet.  Lifer, 719, and a code three bird! 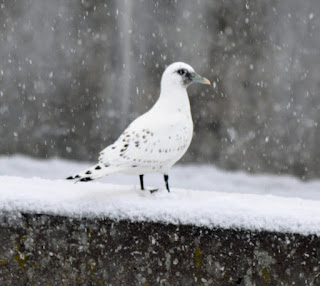 Apparently some of the locals had been feeding it salmon, not the farm raised kind, that would be unhealthy for a scavenger bird like Snowy here, the pet gull of Duluth.  I could see a statue being made of it someday in a way only Duluth and Minnesotans would do it.

I added two other gulls, Herring, #237, Thayers, #238 and then after 5 minutes of pictures I sprinted to the open water on Barker's Island for ducks, and I was not disappointed, #239.  Common Goldeneye.

I turned around 40 minutes after arriving in the ports and headed south and then in Pine City, 20 miles from my parents and grandmother, I headed into Wisconsin.  I drove under a northern shrike #240 on a powerline and crossed into the Badger State.

Grandma Lucille, my birding grandmother, whom I'm dedicating this year too,  among other things had made soup as if she knew I was going to show up out of the wind.  I hadn't even told here I was nearby.  It was also great I could bird her feeder.  I added 5 species to the year list. 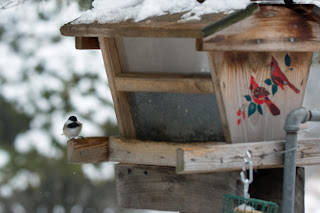 The usual, it isn't a very good bird year for her, not even cardinals but then she told me of a rarity an unknown bird.  I waited and then it showed up! 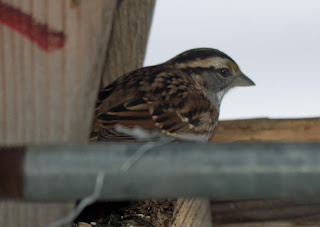 A white-throated sparrow.  It is an ebird rarity for January.  My grandmother hoped birders would come from miles around to her feeder but I told her it isn't that kind of rarity.  Sorry, Grandma, you can't charge the visitors for coffee or have visitors to invite in for coffee, but it was a 50 year feeder record for her, cool!

I ate and made tracks to the airport for my connection flight west, my buddy Jin a/k/a Arvid, and more rarities, 245 birds on the board and still NO Canada Goose!  Try seeing 245 species without seeing one, that may be a record no one will ever break..  We'll see how far it lasts.

It was nice stopping by home. and my old town and even on a travel day, I got a code 3 rarity and to my naysayers who know me...I am NOT the only person in America to have not seen this Ivory Gull!