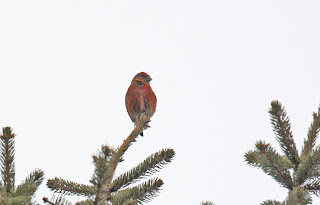 It has been written, mostly by me, that Iowa is the best kept secret known only to a chosen few and of course politicians.  Having spent two significant blocks of time in Iowa in my life, (doing research on leaf-cutting ants at Iowa City and doing a residency in Waterloo and living in Evansdale) I have some opinions on Iowa, and generally, I like Iowa and Iowans.  The difference between South Dakotans and Iowans is that we know we don't matter.
I have five birds that I worry about seeing.  I had seen two of them before now and the third is the white-winged crossbill.  I am planning on heading to northern Minnesota this weekend but very few sightings have been reported of that bird.  The closest reports, oddly happen to be in two cemeteries in NW Iowa.  I looked at the map and the checklists.  The one in Sheldon, Iowa was a few miles closer to me than Sioux City Iowa and it had brown creeper, so I decided, I'd go there.   I had breakfast with my daughter and she went off to school, I...I went off to Iowa.
As you know, I am on a roll..I am in the birding zone as they say.  Things were taking shape and then while I was driving through a ground blizzard, I got a message from Joe Jungers, a Facebook friend.  He wanted to know where I was going in Iowa.  I answered Sheldon.  It turns out Joe found the crossbills in Sheldon, and volunteered to help me find them. Small world.
I didn't know what to expect, but when I finally drove the 200 miles to the cemetery, it looked more like the Pacific NW than NW Iowa.  The Dutch Reformed people of NW Iowa must have liked conifers 100 years ago and they planted them en-mass in this cemetery and they were huge, bushy, and loaded with cones and seeds, something unlike most everywhere else in the northern forests.  The trees in Minnesota were almost devoid of cones, here, this cemetery could feed a thousand birds, but as Joe filled me in, only three crossbills and two pine grosbeak had found this oasis in the farm land settled by Dutch immigrants.
We went searching as Joe said, it could take a while.  In Olaf Zone time, that was ten minutes.  I could see Joe found them and soon I was looking at the male red crossbill transfixed by the bird.  A sharpie came by and they took off, unfortunately, I didn't get a photo I was too busy looking at the bird.  I have only seen the red crossbill in Colorado and Arizona previously.  We refound them and they stood out for photos.  Then we easily found the grosbeaks. 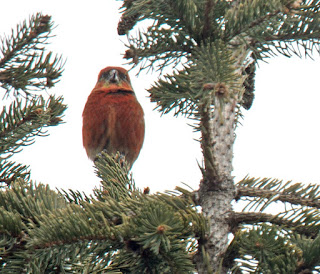 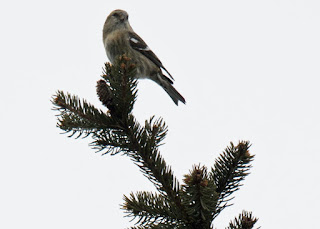 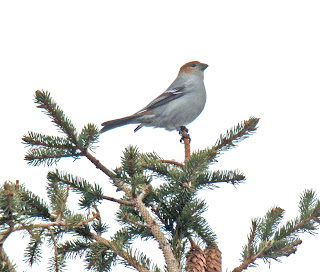 I also saw #388  Brown Creeper, but heard it better...got to love those creepers.

Who would have guessed that one spot in Iowa would yield such treasures.  The WWCR was off the board and I also tallied some birds I would eventually see, but heck, they were now seen.  Thanks Joe for all of your help.  It was worth the 400 mile drive, which was actually just to go get groceries........sour dough bread, sandwich meat, toilet paper, milk, and oh, don't forget the pine grosbeak, the white-winged crossbill, the red crossbill and if you don't mind pick out a side of creeper, the brown is the best.  Ummm...creeper.

No!  It is just Iowa