They say that you plan a big year to a tee and then on day 4, everything goes out the window.  I, too, have experienced that bit of sage prescient foresight but for different reasons than whomever invented this saying.

We arrived from Ft Lauderdale a bit beat up from my computer incident and terrible flight and then upon landing in McAllen in was 42 degrees and raining.  I had my wife and daughter with both were expecting southern Texas weather and my daughter only had with one pair of pants.  What we would experience in the next 36 hours would put hair on any man's chest and pull the hair our of his head.
To say it politely, January 2nd was a brutal day for birding.

We went to Brownsville for the red-crowned parrots and things didn't start out well.  We couldn't find any...then everyone got cold, just about to give up when I heard a parrot chorus but just for a second.  I was an entire park away and we had to walk to the opposite corner in Oliveras Park (sp?) and we finally found them silent, patient in a tree.  "Damn birds!" would be a frequent saying of mine for 36 hours. 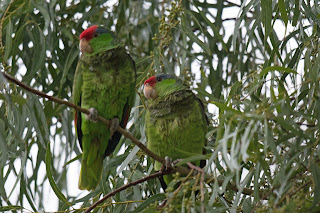 I shot a few photos in the rain and we headed out to Frontera Audubon Center for the wettest stakeout ever.  Goal bird Crimson-collared grosbeak.  Let me preface it by saying 5 hour stake out on three separate occasions  on 1/2/ 2016 for the bird and my wife just about died, my daughter impressed me by her toughness but in the end she was literally turning blue.  We found out we missed seeing it well just ten minutes before we got there.  It was the parrots fault no doubt, if they would have just squawked earlier.  Luckily in all this my daughter and I heard it call by the shed on two occasions, the second time unmistakable and we saw it in deep in the underbrush move but we could neither go in to get it nor photograph it. Other birders wore garbage bags, tents, anything to help in the rain.  It was just that bad. We came back to try for a photo on 1/3 and it was not so nasty, just damp and 45 degrees, but after an hour we already had the bird and it was clear that we were not going to get the photogenic moment and we needed to see some birds.  but more on that later.  It was reseen about an hour after we left for photographs, but alas, not all lifers get to be photographed, oh well.

I took some shots of clay-colored thrush, which were all over Frontera but then despite having waterproof equipment on my camera, I got soaked I had to keep it in the car the rest of the day by the heater to dry it off for fear of ruining it.  At least I got some photos of the thrush 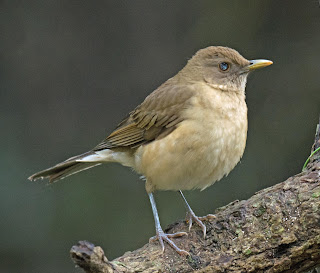 To say it was wet at Frontera would not be honest, it was like a lake and compared to that Santa Ana was a waterfall.  We got suckered in, during one of the dry off breaks at Frontera we drove over for the northern jacana.  It wasn't raining in the parking lot.  I should have realized that.  It was 11am and I was the only car in the parking lot and that, even after the aggressive ticket taker gave my new 2016 federal park pass the once over.  No one was as much of an idiot as us.  We walked to Willow Lake in relative dryness, then we reached the 3rd overlook and it was then that the skies really gave way.  Finally in an act of something like pity, I sent the women to the 2nd overlook as it was covered.  I braved it for 15 minutes more and even my raincoat was giving way so I evacuated to the shelter, too.

"Dad, does that bird have yellow wings?"  My daughter asked.

"Thought so."  Lena said.  "You wouldn't believe it, but it was right under the blind.  It flew off though."  I was somewhere between angry and dejected and then they added.  "but it flew right into those reads. Are fingers were too cold to use the touch screens on the phone."   It was there but never did I see the complete bird with a couple of reeds always in the way and it finally flew up clear as any jacana could and moved 50 feet.  Impressive yellow wings, that was true.  Another life bird for me, #716.  I wanted to fist bump them but they just ran to the car.

The women were so wet so we went car birding to Shrimp Bridge, which was way back near Port Isabel. I was hoping in vain that the rain would cease, during the grumbling in the car.  We did get there, there were lots of shorebirds and terns.  There was one long-billed curlew and one Wilson's Plover, whew!  Two birds I have not typically seen much of.  I really wanted both off the board.  I had seen one 4 days earlier scouting the location.

The ladies fell asleep in the car as I hurried back to Frontera for another round of wet 'fun' passing our previous motel again.

After getting the grosbeak on 1/3.  We went over to Estero Llano Grande to roll up the numbers.  The common paraque was back in the usual spot, 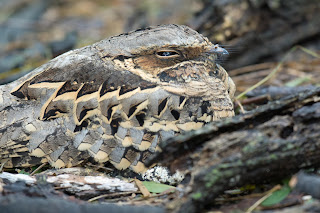 The screech owl was absent though, one of the few strike outs

Afterwards, we headed west to bird up the valley to Laredo, we stopped at Anzaluas Park and found out it was closed for the holidays...a huge park closes when people are off?

The Burrowing owl spot was nearby but unlike when I was over here 3 days earlier, with 5 border guard vehicles camped on the spot, we could find the owl, finally taking one for the team I walked below the rocks, it was farther down there than it looked and I wasn't about to break an ankle.  My daughter stayed on top.  Bird off the board! 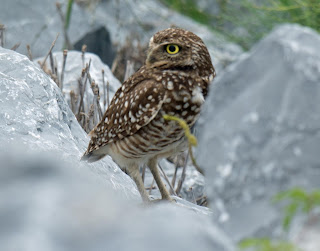 Next at Saleneno we got three orioles
Hooded Oriole 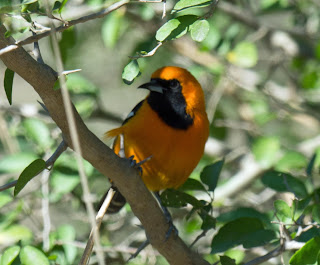 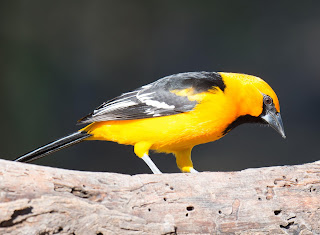 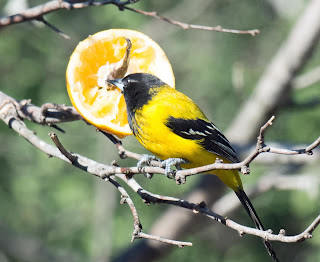 We searched San Ygnatio for seedeaters but found none, we did get ringed kingfisher, and a gray hawk right over our car. 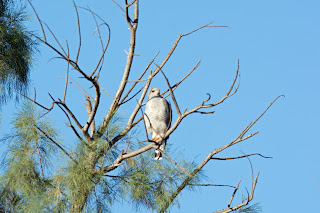 We woke up after overnighting in Laredo.  I used to say I didnt like Laredo, mostly die to the sulphur smell, but it does have a few ups.  We got lucky in Laredo, we went to the golf course west of town, Max Mendel Golf Course and ran into a local birder named Raul and a woman Katherine from the state park who were looking for red-billed pigeons to confirm last weeks sighting posted on Ebird.  They were suspicious as there was no fruit for them, and they are rare in the winter.  Gracious hosts, they also showed us some white-collared seedeaters.  I saw 2, my daughter 5 but they were down on the river in the cane and it was early and bad light, I had very good photos of this bird so I didn't care for a bad one.  We cruised all the spots which was GREAT intel but alas no red-billed pigeons this time. I'll wait to they come back in the spring and I'll be back as the Terminator says.

an olive sparrow peeking out of a bush 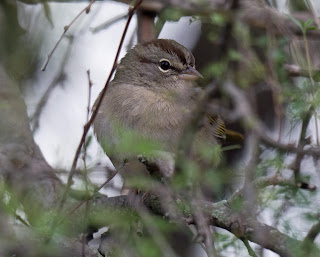 I did get a verdin, we flushed a roadrunner driving around in our golf cart, and I also got a Lincoln's sparrow and a gadwall for five more species, pedestrian though they were.  Most importantly, the seedeater was off the board, coded bird #4 for the LRGV.

We headed quickly up to Martinena road in Encinal for quail but alas no quail, four new species of sparrows were found and a very photogenic Harris Hawk, and we needed to head to the airport 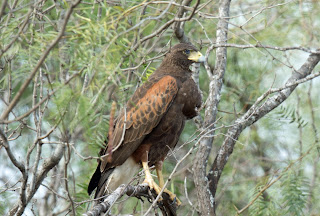 On I-35 we called our son Tyko, home from college.  He went to Minneapolis with his brother, yesterday.  It was a nice chat.  "By the way dad, there is something I should tell you."  He siad in closing the conversation.  "We took your car to Minneapolis.  I had my daughter's car down here for the room and to put bikes inside it at the airport.

"Well it was foggy and Allwin sort of lightly hit a deer.  We threw the parts in the back." My wife put her hand on mine.  I was literally speechless and I requested they send me a picture.

They sent me a picture 5 minutes later. 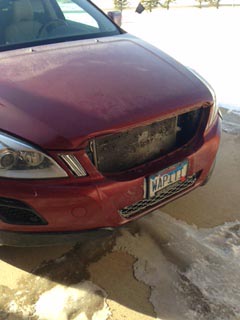 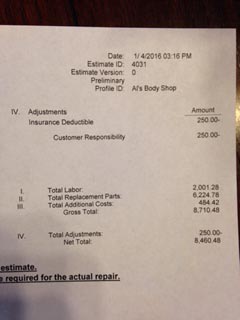 Can it be fixed in two weeks when I return?

I'm on the 6:10 to Yuma and the Streaked-backed Oriole awaits and I had to pack for bear and organize what I was taking from the airport in San Antonio. 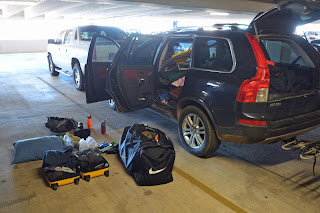 The fun of living in your car! I got two bicycles in it, a full sized cooler in front.

Well, more from Arizona, and hope my car gets fixed.....children!!